The Karma of Cats Spiritual Wisdom from Our Feline Friends

By Diana Ventimiglia, Various Authors
What Frederic and Mary Ann Brussat learned about respect and authenticity from living in a household of ten rescue cats.

"We flunked the rescue-group foster-placement test. That's the test you face after you agree to socialize kittens or feral cats and prepare them for adoption. When the moment comes to take them to the adoption fair, you can't give up the kittens and you decide that the ferals really don't want to live anywhere else. This is what happened to us multiple times.

"After our first two cats, Boone and Bebb, died, we thought we would wait a while before getting new cats. We'd given Bebb hospice care and had not traveled for more than a year. But our break from being cat companions only lasted two months. We found we really wanted fur in our lives.

"Enter one-year-old Lalla, adopted from the rescue group that we would soon be working with to place other cats. She was full of energy and ran through our large loft in New York City, enthusiastically jumping up on every counter and piece of furniture. The rescue group advised that since she was a calico — calicos can be dominating and territorial — we should get another cat right away before Lalla had claimed the whole place as her exclusive domain. She tried to do that anyway. Over the years, she developed the habit of sitting at the door to our bedroom to make sure no other cats came in. Even if we had wanted more cats to make night-time visits, she would not allow it. It was just the way she was.

"We adopted Charley to keep Lalla company. He took over our home in his own way. Charley liked to move cloth things. He would go into the bathroom and get the towels, then drag them around the loft, howling about his 'catch.' If he couldn't get the towels, he would take the pillows off the couch, the dish towels from the kitchen, any scarfs we didn't hang up, the stuffed animals in our bedroom, and more. We told our guests to close their suitcases or else Charley would unpack for them overnight.

"Yelling at Charley as we took cloth things out of his mouth made no difference. Figuring that this odd behavior made him happy, we tried interrupting him, petting him, and lavishing him with gentle words. He still started each day by walking around the loft looking to see if there was anything he could move. We closed the bathroom and closet doors and put the dish towels and pillows away. We decided to just live with Charley the way he was.

"Julian was only sixteen weeks old when Mary Ann trapped her in her hairdressers' back yard in Spanish Harlem. She was already scared of humans, and the vet predicted she would always be feral. But we were determined to turn her around. We put her in a large cat playpen and gradually, over several months, got her used to us being around (our office was in the loft). One day Julian allowed us to pet her with a stick; a couple of weeks later we could use our hands. One day she came up to the door of her playpen and seemed to be asking for more affection from us. Eventually we let her out to join the other cats. Julian never became a lap cat, but she was no longer afraid of humans. She was not demanding of us or the other cats. She sometimes hung out with several of them; often, she found her own space for a nap in the sun.

"Merton was perhaps the most adoptable of any of our foster cats. He was so handsome! He was rescued from the streets of Hoboken, New Jersey, at six months old, but for some reason he was not really feral. He was easy to socialize just by playing with him. We fully intended to get him a new home, but every time we got him ready to take to an adoption event, he would wrap his tail tight around his body, give us that 'what?' look, so we just didn't go. Merton was a character. Long-haired with a big-jowled face, he weighed nearly twenty pounds and liked to sit on the back of our chairs while we were watching movies. Sometimes that meant he sat on a guest's head; nobody ever seemed to mind.

"Tara, an all-black cat, and Boots, a tuxedo, came to us at the same time. Neither could be touched, and Boots would try to bite you. They lived in the cat playpens for months while we tried to convince them that we could be trusted. Tara accepted her new situation quite readily, and we thought we could get her adopted easily. After all, she would sit in one of our laps and purr. But Tara had other ideas. Every time someone was due to meet her, she disappeared. We had lots of black bookcases, and she'd hide in one where we just didn't see her. After the fifth time this happened, we decided hiding was Tara's way of telling us she wanted to live with us.

"Boots was a harder case. She was with us for fourteen years, and we were never able to pick her up. Taking her to the vet required a long chase, many threatening hisses, and finally covering her with a towel so we could put her in a carrier. Yet Boots seemed in all other ways to be very happy. She liked cats, and by the time she came to live with us, there were plenty of feline companions for her.

"Boots' favorite was Clare, a Maine Coon cat with a very nurturing nature. All the cats got along with Clare, and much to Lalla's dismay, she was really the top cat in the household. Boots followed her around and snuggled into her lap to nap. After Clare died, Boots kept looking for her. That relationship taught us a lot about how animals can bond with each other. We respected Boots's solitariness and admired her deep relationship with Clare.

"Nur also benefited from Clare's ministrations. She came to us having been rescued from the streets of Newark where she was either abused or had suffered a bad fall as a kitten. As a result, she had seizures all her life. We gave her herbs, which mitigated the seizures for years, and then drugs. But it was Clare who groomed her and comforted her. Nur had a funny run; she crossed her front paws in front of each other and kicked out her back ones like a rabbit. When she galloped down the whole length of the loft, she made quite a racket. But she also proved to us that even with a disability, a cat can have a wonderful life.

"If you've been keeping track, you will have counted eight cats in the loft at the same time. There were two more for a total of ten.

"Pema and Puja came to us as eight-week old kittens. They were very beautiful — dilute calicos with grey, white, and cream markings. Pema was short-haired and Puja long-haired, even though they were sisters. Their coats were not the only things that made them different. They had distinct temperaments from the start, and as they grew they became even more different.

"Pema loved to be around us, to be petted and held. She spent the whole day on Mary Ann's desk, and because she also shed a lot, we had to clean fur out of the keyboard twice a week. She was not particularly interested in the other cats. She wanted a human!

"At first we thought Puja was just shy — or resistant to us because we had to give her medicine for an upper respiratory infection when she was very young. But as the years went on, we discovered that Puja would best be called a hermit. She liked to be alone, away from both the other cats and us. She claimed the little house at the top of our cat tree as her territory, and she spent most of the day up there.

"When we moved from New York City to California, only Puja, Julian, and Merton were still alive of our big cat family. We got a new cat tree with a house on top, but Puja never went up there. We placed an enclosure behind the couch on our screened-in porch, and she made that her new hermitage.

"Sometimes we wish we could pull her out of her introversion — especially now that Julian and Merton have died, and she's the only cat in the house. But if we set out on a campaign to change her, she would have no quality of life and neither would we. She is who she is. (Update from Mary Ann and Frederic: Puja died at age 19 in November 2019.)

"In our book Spiritual Literacy, we listed some lessons we learned from our first cats, Boone and Bebb. Among them were: Live a rhythmic life. Savor the present moment. Keep out of harm's way. Cherish your wildness. When you want something, be persistent. If you are embarrassed, turn your back on the situation and get on with your life. Enjoy small treats. Keep yourself clean. Take a nap when you need one. Everyone needs a secret space.

"Our family of rescue cats have reinforced those lessons and taught us one more very valuable one. They have shown us the importance of a core spiritual value we try to live by — reverence. It is the way of radical respect. It recognizes the presence of the sacred in everything — our bodies, people, all elements of the natural world, and animals. Our cats have reminded us that not only are they signs of Spirit in our lives, they are not under our control. As American naturalist Henri Beston wisely wrote in The Outermost House, animals should not be measured by human standards: "In a world older and more complete than ours, they move finished and complete, gifted with extensions of the senses we have lost or never attained, living by voices we shall never hear. They are not brethren, they are not underlings; they are other nations, caught with ourselves in the net of life, fellow prisoners of the splendor and travail of the earth."

"To live with radical respect for our cats means letting them be who they are, no matter how inconvenient or irritating their behavior may be. We have lived with Lalla and Pema's gregariousness; Charley's cloth addiction; Clare's motherliness; Nur's awkwardness; Julian's, Merton's, and Tara's individuality; and Boots's and Puja's shyness. As we have adjusted to the cats' natural ways, we have asked ourselves which of our behaviors and character qualities are essential to who we are and which can and should be changed. Such reflection is always a good spiritual practice.

"Our cats, just by being themselves, have encouraged us to express our own uniqueness. They have taught us what it means to honor our true selves."

Frederic and Mary Ann Brussat are the Co-Founders and Co-Directors of The Center for Spirituality & Practice and its multifaith website SpiritualityandPractice.com providing resources for spiritual journeys. They are the authors of Spiritual Literacy: Reading the Sacred in Everyday Life and Spiritual Rx: Prescriptions for Living a Meaningful Life. 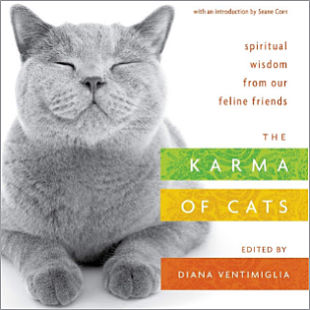