By Katherine M. Gehl, Michael E. Porter
A look at the powerful political party system in the U.S., which was not envisioned by the Founding Fathers.

"America's political system has become the primary cause of our decline and the preeminent barrier to addressing the very problems it exists to solve. Americans are resigned to political gridlock and dysfunction — or worse, are disinterested in changing it. Citizens accept as normal the system's decades-long retreat from deliberation and problem solving and its advance toward today's self-service and hyper-partisanship. We accept this new normal, in part, because we are conditioned to helplessness. We assume that our political system, warts and all, is a public institution governed by impartial laws dating back to the Constitution.

"But we would be wrong. Much of what makes up today's political system has no basis in the Constitution at all. There are only six tiny paragraphs in the Constitution detailing how Congress should work, and only a few sentences describe how Congress is to be elected. Most of the rules that shape the day-to-day behavior and outcomes in the political system are perversely optimized — or even expressly designed — by and for politicians themselves as well as their allies in the larger political-industrial complex. The average American citizen today is rarely a beneficiary. Politics is the only major industry in America in which the rivals — the Democratic Party and the Republican Party — write their own rules, virtually unchecked.

"The Founders were wary of political parties. President George Washington dedicated a healthy portion of his Farewell Address in 1796 to alerting the young country to the dangers of political partisanship. Washington's successor, President John Adams, said, 'There is nothing I dread so much as the division of the republic into two great parties, each arranged under its leader, and concerting measures in opposition to the other.' Completing the Founder trifecta, President Thomas Jefferson quipped, 'If I could go to heaven but with a party, I would not go there at all.'

"Jefferson, Adams, and Washington were each badly bruised by the early politics of the republic — by opponents, political mercenaries, and even one another. There was no love lost for partisanship in their founding circle. Given that we failed to heed their advice to remain vigilant against the dangers of unchecked party power, it's likely that not one of these men or their trusted acolytes would be shocked by the extent to which unhealthy political competition has hijacked democracy itself.

"But the problem is not politicians or political parties per se. Most politicians are genuinely seeking to make a positive contribution but are trapped in a system they cannot single-handedly change. Parties in a democracy play a critical role organizing citizens around shared needs and ambitions, and communicating the platforms and ideas that can help others make informed decision. At various points during their long histories, both parties have moved the country forward. We support strong parties — provided that their strength manifests itself in their members' ability to create and enact legislation in the public interest. This would be a stark contrast to their current ability to keep winning elections — and thwarting new competition — even when very few are satisfied with the outcomes for the country.

"Today, the problem is the nature of competition between the parties and politicians, as well as the surrounding industry actors and organizations. The American political system is perfectly designed to serve the private interests of this political-industrial complex: to grow its power and revenues and to protect itself from threats. It's not designed so well to serve citizens — those who should, by rights, be the most important customers of the industry." 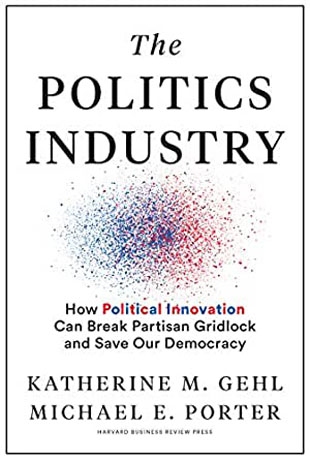