By Brian D. McLaren
Brian McLaren on how we can rewrite our brains for solidarity by giving up supremacy.

"The road to faith after doubt is often lonely. But beyond the loneliness, you discover a place of solidarity where everything is sacred and everything belongs, including your doubts and including you. This replacement of supremacy with solidarity, I imagine, involves an actual rewiring or re-patterning of our brains.

"You'll remember that . . . I offered a simple description of the human brain, using the metaphor of a three-member committee. We begin life with our instinctive brain, our oldest, fastest, and most highly developed committee member, geared toward survival, safety, and pleasure. Then we emerge into our intuitive brain, that great facilitator of relationships and belonging. Then, our intellectual brain comes online, specializing in independent analytical thought, in forming beliefs and opinions, and in discerning meaning. As we grow, to one degree or another, we learn to integrate these three modules or members of the brain committee into one whole person.

"In some of us, survival and pleasure predominate. In some, relationships and belonging predominate. In some, beliefs and opinions predominate. But as we mature, some of us . . . create a whole-brained, whole-hearted, whole-self integration in which love infuses the whole, integrating instinct, intuition, and intellect in the service of the common good. You might say we lean into Harmony [of the Four Stages of Faith] or we practice Harmony, even though we may be currently centered in Simplicity, Complexity, or Perplexity. And how do we do it? We let our supremacy wiring be deconstructed, and we rewire our brains for solidarity.

"Faith after doubt, we might say, means living beyond supremacy. For all of the problems with traditional beliefs, at least they told us that there is a supreme being, and we are not It. In other words, at their best, those beliefs humbled us and tried to dethrone us from our individual supremacy, teaching us that life isn't about me and life is bigger than my little personal agenda. Sadly, though, those same beliefs too often kept supremacy alive for us on a bigger scale. Our religious communities began speaking humbly to God, and then they spoke boldly about God, and then they spoke proudly for God, until too often they spoke arrogantly as if they were God. Our gods became our mascots and symbolized the supremacy of our race, nation, tribe, or religion.

"Doubt, we might say, can liberate us from these supremacist projections. It is our way of deconstructing a foolish, ego-driven faith and preparing the way for a meaningful life — and a life-giving faith — beyond supremacy.

"As we release our desperate grasp on supremacy, as the desire to dominate slips through our fingers, something in us dies. Much is lost or forgotten, deemed not worth remembering. But in the letting go, something new comes, is born, begins, grows: a sense of connection, of not-aloneness, of communion and union and belonging. We descend from the ladders and pedestals we have erected, and we rejoin the community of creation, the network of shalom, the ecosystem of harmony. The loss is no small thing, ah, but the gain is incomparably greater." 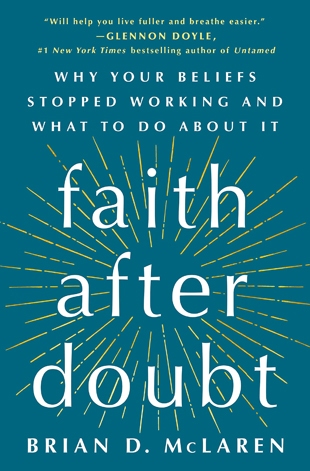