By Kurt Vonnegut, Jr.
A collection of essays, reviews, speeches, and ditties that looks askance on the human adventure.

I am staring at a picture of Kurt Vonnegut, Jr., on his latest book, a collection of essays, reviews, speeches, and ditties. His mustache and wrinkled face remind me of you, in a way. I suppose one could call Vonnegut a cosmic patriot — he loves life so much that he tells the truth "plonkingly." You and I used to talk about things being out of kilter in everyday life. Well, Vonnegut is a detective of the bizarre nature of reality, sniffing about, shuffling through places and ideas where no one else would want to go. Sort of a popeyed romantic and a crazy realist. They say he's wacky and so he is. Zapping the pretensions of writers' conferences and flushing the toilet near the altar of Maharishi. About the guru he notes: "I can see where influential people would like Maharishi better than Jesus. My God, if the Beatles and Mia Farrow went to Jesus, He'd tell 'em to give all their money away."

You once told me about making baseballs with Uncle Charley as a kid. Raveling the string round and round. A metaphor for the puzzle of life. One needs patience. Vonnegut is mystified by the human condition and isn't afraid to say so. Who can understand what's been going on for the last 20 years (this collection covers two decades of Vonnegut's writings)? Kids read Hesse and make a god out of him because they're homesick. We elect a President who believes in Divine Right. We spend $33 million to go to the moon. Thousands starve to death in Biafra. Sex maniacs are born in Indianapolis.

Vonnegut covers all this stuff and looks askance on the human adventure. He's puzzled. Scratching words tentatively on the page. A comic book style for a comical world.

His smile reminds me of you. Wish you could read the book. Wish you were still around. But since you can't and aren't around, I'll continue to read Vonnegut. And smile, sadly. 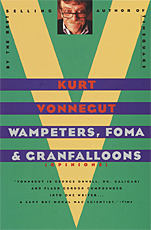