By Kurt Vonnegut, Jr.
A novel in which the author faces death and trips out on the end of the world -- hi ho!

"What is there more of in the world than anything else? Ends.
— Carl Sandburg

The United Sates of America has fallen apart at the seams. Urban centers have been turned into rubble by gravity jolts, and the population has been decimated by various plagues ("Albanian flu," "The Green Death"). The former President, Dr. Wilbur Daffodil-II Swain, ponders the past in his old age. He remembers how he and his dizygotic twin Eliza were rejected by their parents as monsters. Could they help it if they were born with extra nipples, fingers, and toes? Wilbur and Eliza were sequestered away in a Vermont mansion and visited once a month by their wealthy folk.

When the twins decided to no longer cultivate lunacy, Wilbur went on to medical school and became a pediatrician. Eliza lived a life of adventure until she died at the age of 50 in an avalanche on Mars. Their greatest collaboration was the creation of a popular child rearing manual. They also dreamed up a scheme for "creating artificial extended families in America by issuing everyone a new middle name." Later when elected President on an anti-loneliness platform, Wilbur put into effect a plan which made family feeling identical without patriotism. But it was all lost through various catastrophes.

Slapstick is a sometimes clever, sometimes tiresome contrivance. Vonnegut tells us at the outset that the book is "about desolated cities and spiritual cannibalism and incest and loneliness and lovelessness and death and so on." He twiddles with this theme and fiddles with that one — all too often emitting a "Hi ho" which he calls a "senile hiccup." The book is about Vonnegut facing death — the one end that won't go away.

On another level, Slapstick is Vonnegut tripping out on the Apocalypse. Whether the story is seen mainly as an autobiographical journey or a tale about the End of the World, Vonnegut remains better at beginnings than endings. Hi ho! 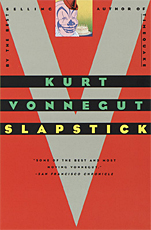