By Kent Nerburn
A classic on Native American spirituality that will stand the test of time and give you insights into fresh meanings of reverence, silence, honor, shadow, and redemption.

Kent Nerburn (The Wisdom of the Native Americans) has been deeply involved in Native American issues and education. In this extraordinary work (which won the 1996 Minnesota Book Award), Nerburn has fashioned a powerful drama around his encounters with Dan, a Lakota elder who unflinchingly speaks the truth about Indian life, past and present.

Dan refuses to whitewash the historical clash between whites and his people. Nerburn comes with certain expectations and idealism that is shattered by Dan's refusal to be written off as just another Native American wise man. The author becomes the brunt of many jokes as he travels down dusty roads, sees reservation life, and is exposed to his own prejudices. This teaching strategy of Dan reminds us of the tricksters in Zen and Sufism who are always trying to take us beyond conventional thinking and dogmatism.

Nerburn gets the point and learns some hard truths about himself and his assumptions about Indians. He respects the diversity of Native American experiences and the differences between tribes. Nerburn stays far away from the clichéd images of the drunken Indian, the vicious savage, the noble wise man and the silent earth-mother. And he acknowledges the harm done by whites who exploit Indian themes or rituals as well as those who fall under the "Cherokee Grandmother" syndrome (claiming a Native American in their family tree and in a flash being able to be one with these people). This smacks of a pernicious kind of spiritual arrogance where whites try to appropriate for themselves the customs and rituals of other cultures and religions.

In another passage, the Lakota elder sums up what whites can learn from Indians: "Live close to the earth. Get rid of some of your things. Help each other. Talk to the Creator. Be quiet more. Listen to the earth instead of building things on it all the time. Don’t blame other people for your troubles and don't try to make people into something they're not."

When Nerburn wonders about the shabby way people on the reservations live with junk strewn all over the place, Dan gives him an explanation that makes real sense and comes down to a profound understanding of possessions and traveling light on the earth (see the excerpt).

Again and again, this Lakota elder talks about the Native American practice of generosity and sharing which are at the heart of community life. Here is another virtue:

"One day Dan startled me with a full sentence. 'You're getting better with silence,' he said.

" 'You're learning. I can tell because of your silence.'

"I sensed that he had something to say. Dan did not make small talk when he was on his hill.

" 'We Indians know about silence,' he said. 'We aren't afraid of it. In fact, to us it is more powerful than words.'

"I nodded in agreement.

" 'Our elders were schooled in the ways of silence, and they passed it along to us. Watch, listen, and then act, they told us. This is the way to live.

"There was a silence.

" 'That's quite a bit different from our way.' I volunteered, hoping to prod him into further conversation.

" 'Yes,' he said. 'With you it is just the opposite. You learn by talking. You reward the kids who talk the most in school. At your parties everyone is trying to talk. In your work you are always having meetings where everyone interrupts everyone else and everyone talks five, ten, or a hundred times. You say it is working out a problem. To us it just sounds like a bunch of people saying anything that comes into their heads and then trying to make what they say come around to something that makes sense.' "

Filled with incisive observations, Neither Wolf Nor Dog is a classic that should be read and savored by anyone interested in spirituality. Near the end of the book, the author listens as Dan explains the role that Native Americans have played in the history of America and in the soul-development of whites. It is a poignant passage that will stand the test of time and key you into meanings of shadow and redemption. 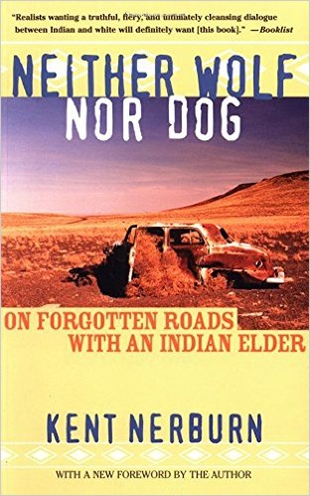