By Evan T. Pritchard
Brims with insights into the relevance of Native American spirituality to the challenges facing us all in our private and public lives.

Evan T. Pritchard is the director of the Center for Algonquin Culture, based in Woodstock, New York, and is professor of Native American studies and philosophy at Marist College. Of Mi'kmaq and Celtic descent, he lectures frequently around the U.S. and Canada. He is the author of No Word for Time and Native New Yorkers. In this edifying resource, Pritchard has gathered together teaching stories from many different tribal traditions organized in the following categories:

The author explains that Native Americans have no unifying creed or dogma other than "take care of Mother Earth and Father Sky, and they will take care of you." Many tribes still share common respect for the sacredness of the circle, the belief in the spirit world, the importance of ritual and making offerings, purification and prayer, healing, honesty, and seeking visions and communication with animals. The stories covered in this paperback deal with many of these themes, and Pritchard comments on this material in his helpful annotations. He is convinced that one of the central concerns of all Native Americans is honoring the earth:

"Although it promises seven generations of gain, it does require short-term sacrifices. It has never been a popular path, and not enough people have walked it. In order to truly change our destructive ways, we need to have an emotional connection to Mother Earth, perhaps even a religious zeal about our relationship with her. Almost all of the elders I have worked with have this zeal."

Here are some points covered by Pritchard that registered strongly in our minds. We liked the emphasis in many stories on the virtue of respect. The Cherokee say, "Treat every person, from the tiniest child to the eldest elder, with respect at all times." This is a spiritual practice that is desperately needed in our times. Although we don't think much of gambling, it was interesting to learn that within Native American traditions, this pursuit is often seen as an alternative to war. Many Jews, Hindus, Buddhists, Christians, and Muslims would agree with the following: "The Cherokee say, 'To serve others, to be of use to family, community, Nation, and the world, is one of the main purposes for which human beings have been created. . . True happiness comes only to those who dedicate their lives to the service of others.' " Again and again in his commentary on the sacred stories, the author refers to other religions: this is a good thing. We also liked the Native American emphasis on transforming the enemy into a friend and the use of tricksters to deal with the shadow side of human nature and community. The final emphasis is on harmony: "This echoes a traditional tenet of the medicine path of Native American spirituality, which is to always seek to restore things to balance as you leave. There is no sin or guilt on the medicine path, but we must repay all debts, resolve all misunderstandings, and fix what is broken before we move on. That is why there are no 'Native American Express credit cards' — whenever something is taken, you always give back." This book brims with insights into the relevance of Native American spirituality into the challenges that face us all as individuals and as a nation embedded in the natural world. 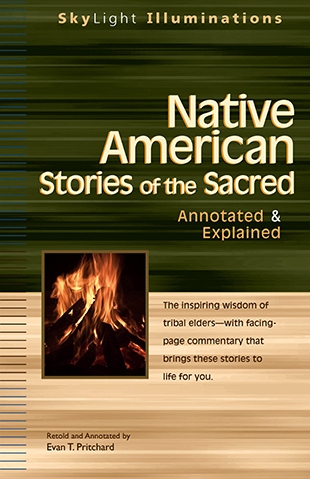