By Benjamin Webb
Shows that the spiritual politics of the future must be ecologically active, ecumenical, and global in outreach.

Although the United States is home to only seven percent of the world's population, it is causing around 60 percent of the damage to the global web of life, according to some estimates. No wonder it is imperative for American religious communities to become more active in the environmental movement. Benjamin Webb, an Episcopal priest and college chaplain, has interviewed 17 spiritual leaders, environmentalists, and naturalists for this volume which is part of the Orbis "Ecology and Justice" series.

Parker J. Palmer talks about the link between silence and social action in the Quaker faith. Paul Gorman, head of the National Religious Partnership for the Environment, notes that there are about 2000 congregations active on environmental issues. David Steindl-Rast points out the need for Christians to see that picking up litter is a continuing part of worship in the "earth household" (a term coined by Gary Snyder). And Terry Tempest Williams challenges us to see rocks, plants, and animals as part of our inclusive sense of community. Benjamin Webb's Fugitive Faith shows that the spiritual politics of the future must be ecologically active, ecumenical, and global in outreach. 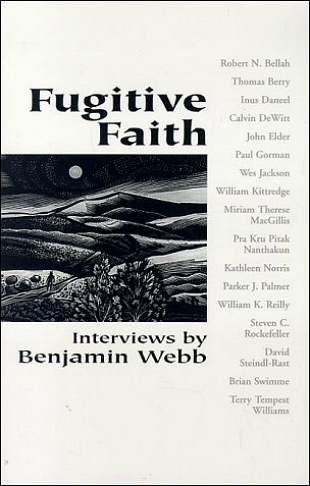