A New Earth Awakening to Your Life's Purpose

By Eckhart Tolle
Challenges us to live in the present moment, to surrender to the joy of Being, and to practice enthusiasm.

In his first book in eight years, Eckhart Tolle (The Power of Now) challenges us to dare to live in the present moment and thereby to transform our consciousness and live in the "joy of Being." Tolle reminds us that there are many obstacles to awakening to our life's purpose. When Jesus said "blessed are the poor in spirit," he was referring to those who travel light: without inner baggage and identification with things, mental concepts, or addictions. But the ego is hard at work in our mind creating new stories and resisting what comes to us in the present moment:

"Most people are so completely identified with the voice in the head — the incessant stream of involuntary and compulsive thinking and the emotions that accompany it — that we may describe them as being possessed by their mind. As long as you are completely unaware of this, you take the thinker to be who you are."

The ego thrives on comparisons, combat, being right, and judging others. There is another path, as this story reveals.

"Kasan, a Zen teacher and monk, was to officiate at a funeral of a famous nobleman. As he stood there waiting for the governor of the province and other lords and ladies to arrive, he noticed that the palms of his hands were sweaty.

"The next day he called his disciples together and confessed he was not yet ready to be a true teacher. He explained to them that he still lacked the sameness of bearing before all human beings, whether beggar or king. He was still unable to look through social roles and conceptual identities and see the sameness of being in every human. He then left and became the pupil of another master. He returned to his former disciples eight years later, enlightened."

Equanimity is a spiritual practice that enables us to see all experiences as the same experience. We get into trouble when we make comparisons and distinctions. In Zen they say, "Don't seek the truth. Just cease to cherish opinions." Tolle ends with an inspiring salute to the spiritual practice of enthusiasm, which is not dependent on winning or losing, confrontation or taking something or someone. Instead of relying on ego, enthusiasm rides the wave of the present moment and "gives out its own abundance." 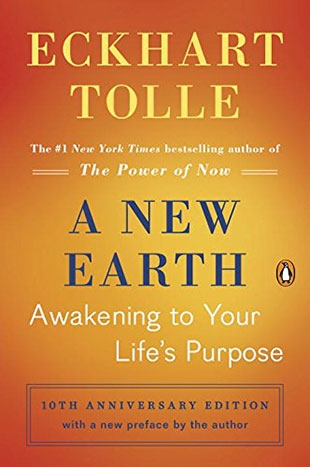