By Irwin Kula
A sagacious book on the blessings and the bounties of spiritual yearning.

"Jewish wisdom teaches that our yearnings generate life. Desire animates," writes Rabbi Irwin Kula, president of the National Jewish Center for Learning and Leadership and a much-sought-after speaker and commentator on culture and religion in the public square. He will be featured in a public television special in December 2006.

We aren't used to thinking about religion and yearning in tandem and yet it is desire that often draws us to God and to others. Our yearning is often stifled by our need for certainty and our fear of mystery; chaos frightens us and we freeze. Yet great truths can be discovered in the messes of life: "The ability to live with seeming contradictions — and the ambivalence and tension these contradictions create — is what gives rise to wisdom. The messes are the point."

Kula explores the spiritual practice of yearning in chapters on truth, meaning, the way, love, create, happiness, and transcendence. He mixes in ancient stories from the scriptures and the writings of Jewish sages as well as anecdotes from the lives of contemporaries who find themselves caught in a tangle of hopes, dreams, and desires. There is an abundance of insights here. Below are just a few to try in your daily life.

• "Many are surprised to learn that 75 percent of all the debates and arguments in the Talmud are left unresolved. The point is to learn to live with not knowing the answers.
• The symbolic meaning of the wine glass that is stomped on at every Jewish wedding is the wish that every couple will find ways to stay whole despite inevitable conflict.
• Jewish wisdom celebrates the carnal for its own sake. It urges men and women to delight in sensual pleasure: "We're so focused on original sin that we've forgotten original pleasure."

In the really fascinating chapter on the yearning for happiness, the author discusses the abundance of Jewish blessings. One of our favorites is a blessing for seeing a crowd of people: "Oh, my God, look at how many stories there are!" Here's one that gets to the heart of entitlement as a block to being with others:

"Like many pushy New Yorkers, she (Rhea) always stood in the same place on the platform, where the door would open to her favorite seat in the front car; she almost always got in before the others waiting beside her. When she was lucky, the seat was empty and she'd get it, and the day got off to a good start. That morning a young man was standing in 'her' spot on the platform. To make matters worse, he rushed in before her, making a beeline for 'her' seat. She stood right in front of him, fuming for most of the forty-five minute ride; a young man acting that way; what happened to the gentleman offering an older woman a seat? 'I tried to be easygoing and let it go. But I almost tripped him on his way out of the train.'

"Then something unusual happened. When he left and she took the seat, rather than feeling relieved, she felt uncomfortable. As she described it, she asked herself, 'Who the hell do I think I am?' Rather than digging into the newspaper — her morning ritual — she looked around the car. 'Was there someone else who deserved the seat more than she did?' When she saw a pregnant woman, she sprung up to offer her seat."

This sagacious book will be a blessing to all who read its teachings on the value of spiritual yearning. 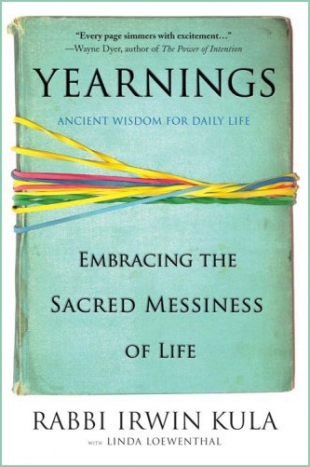