The Tao of Pooh

By Benjamin Hoff
Illustrations of Taoism using characters from Winnie the Pooh.

We have always been intrigued by books that point out the marvels and wonders of popular culture we might otherwise overlook. Benjamin Hoff describes himself as an Oregon writer, photographer, musician and composer with a fondness for forests and bears. In this delightful paperback, he explains the principles of Taoism through the characters in A. A. Milne's Winnie the Pooh. Along the way, he includes a number of Taoist teaching stories by Chuang-tse as well as quotations from Lao-tse's Tao Te Ching. He says of this Chinese sage:
"To Lao-tse, the world was not a setter of traps but a teacher of valuable lessons. Its lessons needed to be learned, just as its laws needed to be followed; then all would go well. Rather than turn away from 'the world of dust,' Lao-tse advised others to 'join the dust of the world.' What he saw operating behind everything in heaven and earth he called Tao (DAO), 'the Way.' A basic principle of Lao-tse's teaching was this Way of the Universe could not be adequately described in words, and that it would be insulting both to its unlimited power and to the intelligent human mind to attempt to do so. Still, its nature could be understood, and those who cared the most about it, and the life from which is was inseparable, understood it best."

Hoff makes it clear that Pooh is the Taoist sage in Milne's books. Three other characters are thinkers. Rabbit uses Knowledge for the Sake of Being Clever; Owl, for the Sake of Being Wise; and Eeyore, for the Sake of Complaining About Something. Little Piglet says of Pooh: "Pooh hasn't much Brain, but he never comes to any harm. He does silly things and they turn out right." The Taoist sage is the one who doesn't take everything so seriously and, as a result, can relish all the small and magic moments of being in the world. 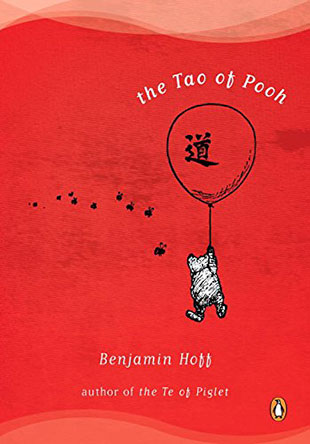