By Eric Metaxas
The stirring biography of a human rights activist and moral hero in his own day and our own.

William Wilberforce (1759 - 1833) has been called one of the greatest social reformers of all time. For 20 years, this bright, well-connected, and single-minded member of the English Parliament worked first for the abolition of the infamous slave trade and then for the emancipation of slaves. The first came about in 1807, and the second just three days before Wilberforce's death in 1833. Thomas Jefferson and Abraham Lincoln both hailed him as an inspiration and example of a human rights activist. Frederick Douglass said that Wilberforce's "faith, persistence, and enduring enthusiasm" had "thawed the British heart into sympathy for the slave, and moved the strong arm of that government to in mercy put an end to his bondage."

This stirring biography by Eric Metaxas is the official book companion to the film Amazing Grace, which will be released across the country on February 23, 2007. This well-researched and written book provides a robust and rounded profile of this passionate abolitionist, cultural reformer, and Member of Parliament. Metaxas pays attention to Wilberforce's conversion to Christianity and his decision not to retreat from the world in order to praise God, but instead to serve God by involving himself in politics. He chose to work to suppress the slave trade and effect a reformation of manners in England. The country had descended into a host of social evils that also included alcoholism, child prostitution, child labor, frequent public executions for petty crimes, public dissections and burnings of executed criminals, and unspeakable cruelty to animals.

Metaxas depicts Wilberforce as zealous man who used his Christian faith to change the world and take on the establishment support of the grotesque injustice of one human being treating another as property. The biography covers his privileged childhood; his friendship with John Newton, the foremost evangelical in London who wrote about his own culpability as a slaver and penned the hymn "Amazing Grace"; his political alliance with William Pitt, who became the youngest prime minister in England; his exceptional career as an independent member of Parliament; his marriage to Barbara Spooner; the release of a book on Christianity; and his physical struggle with ulcerative colitis which was usually treated by physicians with doses of opium.

At one point, Metaxas states: "If ever someone could restore our ability to again see simple goodness, it should be Wilberforce. If we cannot cheer someone who literally brought 'freedom to the captives' and bequeathed to the world that infinitely transformative engine we call a social conscience, for whom may we ever cheer?" He might have added as well, here is a moral hero whom both progressive and evangelical Christians can salute! 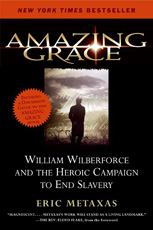