The Work of This Moment

By Toni Packer
A collection of talks, essays, interviews and letters with a former Zen teacher.

Toni Packer began studying Zen in 1967 under Roshi Philip Kapleau at the Rochester Zen Center and was slated to become his dharma heir. Drawn to the work and philosophy of Krishnamurti, who delineated some of the dire effects of total surrender and reliance upon a religious tradition, she left behind the forms and institutions of Buddhism to set up the Springwater Center in New York where she leads retreats. This collection of talks, essays, interviews, and letters reveals her distinctive way of teaching and some of the controversy that continues to swirl around her movement beyond traditional Buddhism.

In an interview with Jacek Dobrowolski, she comments on Soen Sa Nim's concept of "dictator mind" where there is no love, no equality, no freedom, and no harmony. Packer responds with her own arresting image of "lowering the mast of ego." Self-centered thinking creates dualism and all other isms. We grow attached to certain ideas or religions or rituals, and the result is a world of competing religions. Packer advocates another path and practice:

"The emergence and blossoming of understanding, love, and intelligence has nothing to do with posture or tradition, no matter how ancient or impressive — it has nothing to do with time. It happens on its own when a human being questions, wonders, inquires, listens, and looks silently without getting stuck in fear, pleasure, and pain.

"When self-concern is quiet, in abeyance, heaven and earth are open. The mystery, the essence of all life, is not separate from the silent openness of simple listening."

Packer turns her listening and looking approach to other diverse topics including silence, peace fellowship, anger, suffering, trust, abortion, fear of death and living together. Her forte is a deep appreciation of being present. 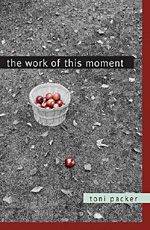