Frithjof Schuon (1907-1998) was a sage, an artist, and a pioneer of interspirituality. He was called the leading light of the Traditionalist/Perennialist School of thought. During the last three years of his life, he wrote 3,500 poems in German, his mother tongue. In these volumes of them, there are autobiographical glimpses of his life, his loves, and his travels. Many allude to the world's religions; others celebrate the creative spirit in music, dance, and poetry. The poems contain references to philosophy, the questing spirit, and the ancient virtues.

In her foreword, the late Annemarie Schimmel writes:

"It seems that mystical experience almost inevitably leads to poetry. The great mystics all over the world used the language of poetry when trying to beckon to a mystery that lies beyond normal human experience, and the most glorious works in Eastern and Western religions are the hymns of the mystics, be they Sufis or Christians, Hindus or Zen monks. Different as their expressions are, one feels that the poetical word can more easily lead to the mystery that is hidden behind the veils of intellectual knowledge and which cannot be fettered in logical speech."

For Schuon, it is better to give than to receive, and this grace is passed on to us through his poems:

"Everything on earth has an end.
When a poem comes, I think it is the last;
Maybe it would be better if, before God,
I replaced it with some other act.

I have often thought I would lay down my pen,
As I have already said everything.
But I am not the Master of my songs;
I cannot withhold God's gift.

Certainly, whatever is useful should reach the world —
And it may be received with an open mind."

Whether writing about the wisdom of the penitents in the desert, the naked woman saint Lalla, the playfulness of Krishna, the peace of the soul, the validity of rosary and prayer wheels, or acupuncture and homeopathy as good medicine, Schuon sees the divine wherever he looks:

Although there is plenty of philosophy in these poems, they also pay tribute to little things:

"One is almost ashamed to take pleasure in little things —
They gladden the soul, even though we know
That they are but trifles, and that we must nonetheless
taste each day the earnestness of life.

Ye who are ashamed, do not forget
That even in little things, sparks of God's Presence appear." 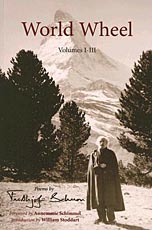