By Brendon Burchard
A spiffy parable set in an amusement park about a man on a quest for personal transformation.

After surviving a car accident ten years ago, Brendon Burchard has dedicated his life to assisting individuals, teams, and organizations to create and master change. As a life coach, leadership speaker, and change management consultant, he has seen how important it is for people to find and fulfill their dreams and play out their destinies. That is why he created this inspirational parable about Henry, a young man who is unhappy with his job and stuck in his life. After his wife Mary nearly dies, she sends him on a mission to an old amusement park which has been closed for 20 years. He must sign a contract to gain access to this place of miracles and ask no questions about how it came to be or what it is. His guide through the amusement park is a groundskeeper. Like the young man in Paolo Coehlo's The Alchemist, Henry is on a quest for personal transformation.

In the Truth Booth, he encounters his mother who gives him some wise advice. Then a wizard helps him see that for most of his life he has been under Society's Spell that has made him "secretly feel inadequate, ugly, weak, slow, small, useless, and helpless for far too long." Henry later learns that the themes of his life — the world is a dark and dangerous place, other people are unfair and hurtful, and you yourself are inadequate — have limited his capacity to become all he was meant to be.

In his encounters with the screaming carnies, Harsh the hypnotist, Gus and the elephants, the Hall of Mirrors, the bumper boats, Larry the Lion Tamer, the Tunnel of Love, and other games and shows; Henry's eyes are opened, his heart is softened, and he begins to grasp the possibilities that lie ahead of him. What we have been does not determine who we are.

"There's a part of every living thing that wants to become itself, " writer Ellen Bass once observed, "the tadpole into the frog, the chrysalis into the butterfly, a damaged human being into a whole one. That is spirituality." 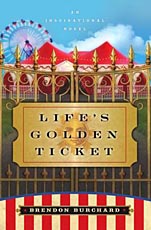