Buddha Is As Buddha Does

By Lama Surya Das
Ten transformative practices that animate bodhisattvas in a world of violence and disarray.

Lama Surya Das is founder and spiritual director of the Dzogchen Foundation in Massachusetts and California. He is the author of many books, including Natural Radiance: Awakening to Your Great Perfection, and is one of the Living Spiritual Teachers profiled at Spirituality & Practice. In this five-hour presentation on four CDs, he explores the bodhisattva ideal in Buddhism as a person who puts the interests of others ahead of his or her own personal agenda. To practice this is to be guided by the ten paramitas (transcendental virtues) in daily life which are:

Lama Surya Das puts on display his energy and enthusiasm and his amazing array of teaching stories and thoughtful quotations. He states: "As long as there is suffering in the world, there is spiritual work to do. We are bodhisattvas, the future Buddhas of this world." 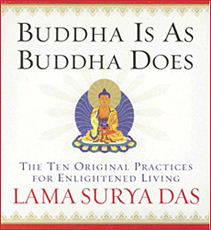