Bead One, Pray Too A Guide to Making and Using Prayer Beads

Prayer beads have been used in all the world's religions. In Christianity, Winston notes, "The very word 'bead' comes from the Anglo-Saxon word bede, which means 'prayer.' The first mention of Christians and counted prayer is found in the third-century writings of the Desert Fathers and Mothers, who carried pebbles in their pockets and dropped them, one by one, as they said their prayers. Eventually, these pebbles were strung on a cord and carried."

The author goes on to discuss the Catholic rosary and the Anglican or Protestant rosary which both consist of a circle of beads and end with a cross. Praying the Catholic rosary is a contemplation of the mysteries, "small kernels of wonder that form the foundation of the Christian story." Winston also explains the creation of the Anglican Rosary, its mechanics and its meanings. She offers this beautiful description of what using prayer beads can be:

"To pray with any set of prayer beads is to embark on a journey. It will be a journey full of paradoxes and contradictions. We will be traveling by ourselves, but on it we will never be alone. We will be going somewhere, but we will sit entirely still. It will be a journey of words conducted in total or near silence. We will travel far, but go only in circles. When we return, we will have gone away without ever having left where we are."

We were impressed with the many fine quotations on prayer included as special treats. Here are a few examples:

• "A season of silence is the best preparation for speech with God."
— Samuel Chadwick

• "The true aim of prayer is to enter into conversation with God. It is not restricted to certain hours of the day. A Christian has to feel himself personally in the presence of God. The goal of prayer is precisely to be with God always."
— Georges Florovsky

• "Mary places in our hands a weapon for peace: the rosary. It is a weapon that every man, woman, and child can take up."
— M. Basil Pennington

Other chapters cover creating prayers for the Anglican rosary, choosing the right beads, making your own rosaries, giving the gift of prayer beads, and resources for beading and praying. You can continue to explore this subject with the author at www.kimberlywinston.wordpress.com. 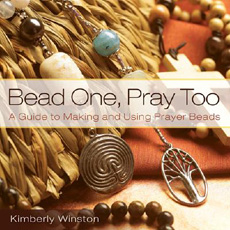