By Paul Marshall
A sagacious collection of columns advocating Christian kindness and hospitality in these contentious and uncivil times.

The Right Rev. Paul Marshall is Bishop of the Episcopal Diocese of Bethlehem, Pennsylvania. For more than a decade he has written 600-word columns for 15 secular newspapers in the 14 counties that make up the sweep of his office. In this sprightly paperback, these essays are organized into the following thematic areas:

As a religious leader, Marshall has many wise things to say about the spirit of Christianity in these contentious and uncivil times. We loved his piece where he emphasizes three spiritual practices that "should make us stronger, better, kinder — and less of a pain in the neck to those around us." They are: encouraging others with appreciative words, being curious about the perspectives of others rather than attacking them, and cutting slack, or not taking offense where none is intended. These would all fall under the spiritual practice of kindness in our Alphabet of Spiritual Literacy. This is the approach sorely needed in our interpersonal relations across the board.

Marshall is saddened by the rush to judgment and condemnation especially by believers who are convinced of their own faith: "I have written several times that our souls are in the most danger — and we are potentially the most dangerous to others — when we believe we are in the right." Jesus was very harsh in his criticism of those who looked down upon others. Marshall notes: "The highest use of religion is not to create the illusion of order and a place from which to obsess about the failings of those around us. The highest use of religion is to make us enough at peace with our own dark places that there is no joy in degrading others."

Messages in the Mall: Looking at Life in 600 Words or Less contains plenty of sagacious advice for these troubled times. 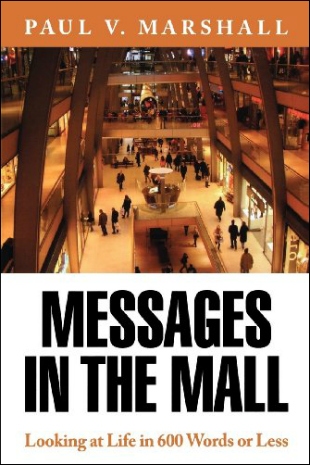