Learning from the Heart Lessons on Living, Loving and Listening

By Daniel Gottlieb
Inspiring essays on lessons learned about empathy, dealing with challenges, and caregiving discerned by the author from living as a quadriplegic for 30 years.

Daniel Gottlieb is a nationally recognized mental health expert, talk-show host, columnist, lecturer, and author of Letters to Sam: A Grandfather's Lessons, Love, Loss, and Gifts of Life. In this inspiring collection of essays, he presents lessons on living, loving, and listening that he has discerned as a quadriplegic over the past 30 years. During that same period of time, Gottlieb has weathered depression, divorce, and the death of his sister and parents. Yet, as he tells people, "my body is broken, my mind is neurotic, and my soul is at peace."

"There is a Buddhist story about a monk who was robbed at gunpoint at a bus station. Immediately after that encounter, he felt great fear. Moments later, he felt great rage at the perpetrator. These emotions continued to wash over him, and by the time he got home he was crying. When the monk told his student this story, the student said, 'After all you've been through, why are you crying?' The monk replied, 'I realized that if I had been raised by that man's family and if I'd had his experiences, I would have been the man with the gun.' "

It is that kind of open-heartedness and empathy that is at the core of a life lived in love. Gottlieb writes about the tenderness that a caregiver must have for the one he or she is looking after (see the excerpt) or the parent must have for the child. Both involve being truly present, not as one teenager put it "drive-by parenting." He ranks listening as one of the greatest gifts: it involves not trying to change people but to learn from them.

Gottlieb is an excellent counselor with many personal stories to share and good advice on universal problems such as loneliness, anxiety, and fear. Here's an example:

"One of the things I ask people at my lectures to do is spend twenty-four hours without sharing a word of gossip. Don't say anything negative about anyone, and don’t say anything to anyone that has the potential to hurt them. Do that for twenty-four hours and see how you feel at the end of the day. 'And,' I say to my audience, 'please trust me. At the end of that day, you have been a peacemaker.'

"It might be an interesting way to become the change that we wish to see in the world." 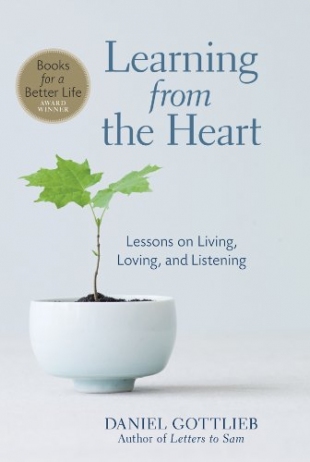