Wrestling with the Angel of Democracy On Being an American Citizen

By Susan Griffin
A meditation on democracy that blends history, biography, cultural criticism, and memoir.

Susan Griffin is an award-winning poet, playwright, and filmmaker. She has written 19 books, including A Chorus of Stones, which was a finalist for the National Book Award and the Pulitzer Prize. In that stunning volume, Griffin blended history, cultural criticism, and memoir, weaving strands of her own family life with the turmoil of nations involved in war and nuclear destruction. That same style is employed here as she begins with a long and complicated look at Thomas Jefferson and the coming together of her father and mother. Griffin states her purpose:

"I want to avoid sentimentality, pierce the glow, and see something more real. And at the same time, that glow itself represents something real in the interior life of democracy, a promise — not just the hope for the private improvements in the conditions of each life that come from freedom and equality, but something more general and less visible. The possibility, perhaps, of achieving the state of mind that can come from living in a world shaped by reciprocity. And from this mutuality, the sense of being kindred with others."

In chapters titled "Liberty," "Yosemite," "Blue Jeans," "Jazz," "Song of Myself," and "Round," the author digs deep and charts her own troubled relationship with her mother, the years with her grandparents, her love of the wilderness, her first civil rights sit-in, her work at Ramparts, and her love of jazz as "America's greatest cultural contribution to the world."

Clearly Griffin believes that American democracy is undergoing a severe crisis with a battle between wealthy and very powerful devotees of authority and order (see the dire effects of their deeds in the italicized passages running through the book) and those who are still tapping into the glow of creativity and courage that has been the legacy of heroes — Ralph Waldo Emerson, John Muir, Jelly Roll Morton, Allen Ginsberg, Angelina Grimke, Rosa Parks, and many others. The author concludes:

"It is perhaps what democracy is in the end: a meeting. It is a metaphor too for the turning point we have reached now, a crossroads between fear and understanding. What will we do in the twenty-first century as we face the choice?" 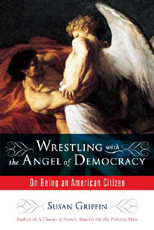