By Robert Kull
The diary and philosophical musings of a man who spent a year alone in the Patagonia wilderness seeking spiritual meaning.

Robert Kull has spent years wandering in North and South America, working as a scuba instructor, wilderness guide, construction worker, dishwasher, truck driver, bartender, painter, firefighter, and professor. In 1985, he lost his lower right leg after a motorcycle crash in the Dominican Republic. He began undergraduate studies at age 40 and now holds a Ph.D from the University of British Columbia.

In February 2001, Kull journeyed to a remote island in the Patagonia wilderness with enough supplies and gear to live for a year. He wanted to explore the breadth and depth of solitude and find answers to some of his most pressing spiritual concerns:

"In many cultures, solitude is recognized as an opportunity to journey inward; in our culture, spending time alone is often considered unhealthy because we tend to believe that meaning in life is found only through relationship with other people. But to be fully human, we need relationship not only with other people but with the nonhuman world, with our inner depths — and with Something Greater. For me, that nonmaterial Presence is mysterious and sacred. It can be experienced, but not defined. And I've learned that in coming into a deeper relationship with my self, I develop the capacity to connect more deeply with others."

This enlightening book contains Kull's diary and a series of mind-stretching and soul-stirring interludes where he ponders the following:

• Journaling and Storytelling
• Method, Solitude, and Meditation
• A Glance at Other Solitaries
• Dancing in the Hallowed Halls
• The Urge to Be Alone
• Technology and Desire
• Spiritual Practice
• Small Mind/Big Mind

The author's only companion is a cat. He struggles against wind and rain, a rotator cuff problem, bouts of depression, and the challenges of fear and anger. He meditates and reads widely (a long list of books is included). One of his fiercest battles is against his own need to be in control of things. The year he spends in the wilderness helps him see the validity of surrender. 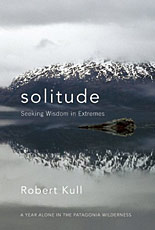