By Joseph R. Veneroso
Challenges us to read the signs of the times and to discover God's presence in every aspect of our culture and lives.

In this stirring collection of essays and editorials from the last 20 years of Maryknoll Magazine, Joseph Veneroso, Maryknoll priest and former publisher, tries to discern the signs of the times through the lens of his Catholic faith. The thematic headings of various chapters signal the focus of his attention: the Virgin Mary and the saints; holiness in ordinary time; spirituality; mission; scripture; mother, father, family; suffering, death and dying; peace and justice. We were especially impressed with his commentaries on the wrong-headedness of criminalizing immigrants, the value of recognizing the face of God in people of other faiths, the threat posed to the livelihoods and culture of the Iowa farmer and the Maasai herdsman by "the corruption of globalization by unbridled economic greed," the ways in which old age has become, for many, their personal Way of the Cross, the replacement of the War on Poverty by "a war on the poor themselves," the anti-child mentality pervasive in the United States, and the Amish practice of forgiveness following the shooting of ten of their school girls in October 2006. In one essay, Veneroso writes:

"The Nativity invites us to search for God in the least likely places: among the poor, the misfits, foreigners, and nonbelievers. Above all, in our humanity. That is the portal through which God entered the world and through which we, in turn, enter into life with God."

The author models for us a way of reading the signs of the times and seeing the presence of God in our culture and in our daily lives. 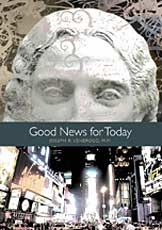