Jesus Was a Liberal Reclaiming Christianity for All

By Scotty McLennan
Makes a good case for the revival of progressive Christianity.

The Rev. Scotty McLennan is the Dean for Religious Life at Stanford University and also teaches undergraduate and graduate classes. He is the author of Finding Your Religion and was an inspiration for Rev. Scot Sloan of the Doonesbury cartoon. In this inspiring work, McLennan seeks to rescue the often ignored and beleaguered progressive Christians who have been overshadowed by the religious right and the secular left. He includes within this stalwart band of believers (some 60 million) people such as theologians Paul Tillich and Hans Kung, civil rights leader Martin Luther King, Jr., biblical scholars Marcus Borg and John Dominic Crossan, scholars of religion Diane Eck and Harvey Cox, anti-war activist William Sloane Coffin, and popular Catholic writer Joan Chittister. All of these and others adhere to a liberal perspective which demonstrates how Christians can be "liberated and playful, inclusive and egalitarian, loving and hopeful, nonviolent and humane, courageous and strong, happy and fulfilled."

McLennan begins with the liberal view of the historical Jesus who was a first-century Palestinian Jew, a prophet of Israel, a believer in the coming of the kingdom of God, a political radical, a healer, a wisdom teacher, and a mystic. He then confronts three hot-button issues which separate liberal and conservative Christians: evolution, abortion, and same-sex marriage. The author is convinced that Christians on both sides of this divide can agree that the essence of Christianity is love. It is this quality that can overcome fear, liberate the church for women and men, and animate our respect for the Bible as a resource that can "touch us deep in our being, inspire us, and transform our lives."

In his discussion of faith, McLennan salutes the practice of engaging in dialogue with people of different traditions. He suggests that liberal Christians be empathetic listeners to atheists and conservatives and be willing to build bridges to them wherever possible. Such an approach is based on adherence to the principles of "tolerance, respect, openness to learn, and willingness to change one's mind."

McLennan hits high stride with his commentary on the progressive response to the great social issues of poverty, bigotry, war, and environmental destruction. He prefaces this section with a quotation by Walter Rauschenbusch, one of the pioneers of the "Social Gospel."

McLennan concludes with sections on Christian doctrine (the Trinity, Communion, Being Born Again, the Apocalypse, and the Sabbath) and The Church Year (Advent, Christmas, Holy Week, and Easter). In the epilogue, the author heralds the core values of progressive Christianity:

"Ultimately what matters most is love and community, including a commitment to social justice and careful stewardship of the earth's resources. There's where hope lies, regardless of how little or how much any one of us may possess materially. Liberal Christianity in the twenty-first century must lead the way through its firm commitment to progress, the essential goodness of humanity, tolerance, and freedom." 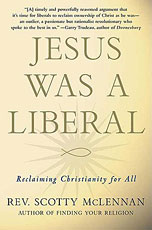