By David J. Smith
A thought-provoking overview of America's diversity and contrasts.

This 32-page book for children ages 9 - 12 is written by David J. Smith and beautifully illustrated by Shelagh Armstrong. It is part of the "Citizen Kid" series from Kids Can Press, a collection of books that inform children about the world and inspire them to be better global citizens.

There are 306 million people living in America. But by imagining it as a village of just 100 people, we can get a thought-provoking portrait of the country's diversity and its place in the global village. Here are some bits of information from the book:

• In this village of 100, 75 are white, 12 are black, 1 is Native American and 4 are Asian and the remaining 8 consider themselves members of some other race or mixture of races.

• The U.S. population is slightly older than that of the rest of the world, and is getting older every year.

• Some regions of America are much richer than others. Delaware has the highest average income per person: about $70,000. The lowest is Mississippi at less than half of that, around $28,000. There are also differences between men's and women's incomes in America. For every dollar a man earns, a woman earns only 77 cents.

Smith ends with a fine essay on further ways to help children understand the United States. 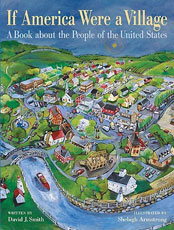