My Name Is Sangoel

By Karen Lynn Williams, Khadra Mohammed
A children's book about the importance of ethnic and cultural traditions to immigrants in America.

Eight year-old Sangoel, his mother, and little sister are refugees in his homeland of Sudan where his father died in the war. Before they leave the camp for a new life in America, an old man from his village tells the boy, "You carry a Dinka name. It was the name of your father and of your ancestors before him."

The immigrant family is met at the airport by Mrs. Johnson who takes them to their own new apartment. They have to learn how to use the eating utencils and the television. Sangoel is eager to attend school, which the Wise One had told him was his true mother and father. In the classroom and on the football field, everyone mispronounces Sangoel's name. It bothers him and so he comes up with a creative solution to his problem which honors his name and reveals to all his peers the importance of ancestors.

My Name is Sangoel is by Karen Lynn Williams and Khadra Mohammmad who also wrote Four Feet, Two Sandals, another story about refugees. This one salutes the value of ethnic and cultural heritage for immigrants. 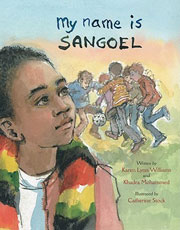