The Green Devotional Active Prayers for a Healthy Planet

By Karen Speerstra
350 quotations, poems, essays, and prayers in celebration of loving and caring for the good earth.

Karen Speerstra is the head of a publishing consulting business Sophia Serve, where she coaches and edits writers from around the country. She is also the author of several books and lives on a small mountain near Burlington, Vermont.

Speerstra calls this paperback "a green book of devotional hours" similar to the Book of Hours, organized around the Church's canonical hours, which have been carried by people since medieval times. Speerstra has selected 350 quotes, poems, and prayers under the thematic categories of Earth, Air, Fire, Water, Time, Space, and Essence. And like a traditional Book of Hours, she has ended with "Sixteen Closing Prayers for Our Planet." Speerstra also suggests that readers might view The Green Devotional as "a little book of ecosophy, because it contains a selection of today's wisdom about earth — secular and sacred, ancient and current."

• "Once you have lived on the land, been a partner with its moods, secrets, and seasons, you cannot leave. The living land remembers, touching you in unguarded moments, saying 'I am here. You are part of me.' "
— Ben Logan in The Land Remembers

• "The Titanic sank not because its captain did not see the iceberg that the ship was headed towards, but because he saw it too late."
— Eric Lambin in The Middle Path

• "The breath of the air makes the earth fruitful. Thus the air is the soul of the earth, moistening it, greening it."
— Hildegard of Bingen

• "You must believe as if your every act, even the smallest, impacted a thousand people for a hundred generations. Because it does."
— Thom Hartmann in The Prophet's Way

• "If there is magic on this planet, it is contained in water."
— Loren Eiseley

• "All things are possible once enough human beings realize that everything is at stake."
— Norman Cousins 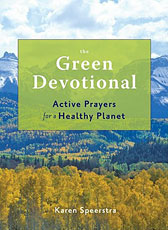