Patched Together A Story of My Story

By Brennan Manning
A parabolic story about Willie Juan, a young boy who grows up to be a successful musician, and his encounter with the Man of Sorrows and the amazing grace of God.

Brennan Manning has spent 44 years on his mission in life: helping others to see and rejoice in the reality of God's love and grace. A recovering alcoholic and former Franciscan priest, he has written many books including The Furious Longing of God. This book is a contemporary parable combining his previous works, The Boy Who Cried Abba and Journey of the Prodigal with new material added. It is divided into three sections: Morning, Noon, and Night, which stand for the seasons of our lives and the challenges and delights that come with each one.

Willie Juan lives in Hopi, a small Mexican town. He stands out as being different, and his peers constantly ridicule his odd-colored skin, his burnt-orange hair, and his stiff leg. He has a source of love and acceptance in Calm Sunset, his wise grandmother who has given him a home. She has told him that his leg was crushed and his body burned in an automobile crash. Afterwards, Willie Juan's father, a migrant worker, left his wife and child for another woman. Working very hard to support Willie Juan, his mother died after a 16-hour day in the fields.

One day the Medicine Man, a mysterious fellow, arrives in town and gives Willie Juan a bottle with bright orange ointment inside. He tells the eager boy about the meaning of friendship, the beauty of his scars, and the importance of living with passion, advising him to call upon the mercy of God whom he calls "Abba." After Willie Juan tells his grandmother about his encounter with the Medicine Man, she urges him to make a pilgrimage to a holy place called the Cave of Bright Darkness. During his journey, Willie Juan is visited by the Comforter and by the Medicine Man whom he now realizes is the Man of Sorrows his grandmother talks about with such reverence. He says to the boy: "You are beautiful because you reflect my beauty in a way the world has never seen before and will never see again."

Willie Juan grows up and becomes a successful woodcarving artist in Santa Fe, New Mexico. Then after suffering a great sorrow, he loses his sight. He takes up playing the trumpet and suddenly is the talk of the town and then a superstar. But despite the accolades and the money, he feels empty inside and bereft of joy.

We cannot go further recounting this parable but we can tell you that Willie Juan's spirit is tested, along with his patience, courage, and trust. In a closing note, Manning salutes the grace of God that is at the core of all his writings: 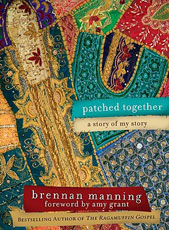