By Justin Richardson, Peter Parnell
A true story about two male penguins at a zoo who become the proud parents of an infant whom they hatch and raise on their own.

Many families in New York City like to take their children to the Central Park Zoo. There they find animal fathers and mothers raising and looking after their playful offspring. In the penguin house this was also the scene, except for two male penguins named Roy and Silo. They did everything together as a couple and were very happy. Their keeper watched them wrap their necks around each other and said: "They must be in love." Watching the other couples make a nest home for themselves, Roy and Silo did the same.

But unlike the other penguins, they were not able to produce an egg to sit on and nurture. They took turns sitting on a rock but it did not hatch. Then their keeper had an idea: he found an egg that needed to be cared for and put it in Roy and Silo's nest. After a month, a baby penguin was born. The keeper rejoices and names her Tango since it takes two to make a tango. This little one was the first penguin in the zoo to have two fathers.

And Tango Makes Three written by Justin Richardson and Peter Parnell and illustrated by Henry Cole is based on a true story. It won the Henry Bergh Award for Children's Books from the ASPCA (The American Society for the Prevention of Cruelty to Animals). It salutes the fact that homosexual animals, just like gay human couples, can serve as loving and caring parents. This delightful children's book deserves a wide readership. 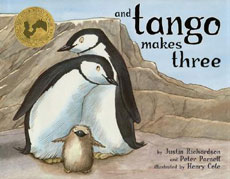