By Theodore Roosevelt Malloch
A thoughtful meditation on the spiritual meanings of generosity.

St. Augustine said: "Discover what being generous means, and begin living it." Theodore Roosevelt Malloch, chairman and CEO of the Roosevelt Group, a leading strategic advisory and thought leadership company, took that advice and has nurtured it for many years. Also the founder and chairman of the not-for-profit Spiritual Enterprise Institute, the author sees generosity as "a virtue, a habit that shapes and governs a way of life. It influences expectations, causing people to look at the world as though others — not themselves — are the principal reason for the world's existence."

Malloch takes a brief look at how all of the world's religions see generosity as a mark of living well in the eyes of God. Even modern secular philosophy celebrates this virtue as "a universal moral urge, our defining nature." The author then examines his own tradition of Christian thinking by focusing on St. Paul's teachings and practices of generosity. He concludes that those who respond to the gift of grace offered by God are energized to give freely to others.

Anyone who is thinking seriously about generosity knows that it does not just include giving money. For most people, it involves the gift of time and talent, in service of others: "Stewardship is not some Faustian bargain or a form of long-term hedonism directed to the happy afterlife. It is nothing more than a 'living' faith, here and now, next door, across the nation and around the globe."

Malloch points out that helping a stranger is congruent with a free economy, that science has proven that unselfish giving spurs mental and physical health, that the future of giving looks bright, and that business and society are opening to the idea that responsibility and generosity belong together. The author has included profiles of people he sees as exemplars of generosity including Mother Teresa, Johann Sebastian Bach, William Wilberforce, Oprah, Andrew Carnegie, and others. 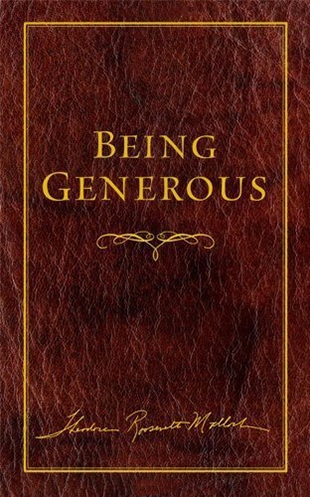