By Scotty McLennan
An intriguing book on the different stages of faith and the spiritual practice of hospitality.

Rev. Scotty McLennan has been a Unitarian chaplain at Tufts University for 17 years. He also moonlights as a professor of ethics at Harvard Business School. Previously, he fashioned an innovative legal aid ministry. At one point, he took a year's leave of absence for a spiritual journey to different religious communities around the world.

Finding Your Religion relates the stories of a variety of individuals and the different stages in their faith development: a Protestant who became a Catholic, a Catholic who converted to Judaism, and others. McLennan outlines the six stages of faith development and uses various novels — Herman Hesse's Siddhartha, Philip Roth's The Ghost Writer, Shusako Endo's Deep River, Leo Tolstoy's The Death of Ivan Ilych, and Mordecai Richler's The Apprenticeship of Duddy Kravitz — to illustrate different facets of the spiritual journey.

This solid and substantive defense of interfaith understanding includes chapters on sacred places, the role the senses can play in religion, the significance of ritual and humor, and the importance of suffering in the spiritual life. McLennan stresses that the world's religions must become more attuned to what they have in common in order to lessen the chances of more religious violence in the future.

Finding Your Religion is tailor-made for college students and anyone else who needs an orientation book to center a spiritual quest. McLennan's admirable mix of openness and hospitality makes this a fine resource for seekers of all stripes.

Try a Spiritual Practice on Hospitality 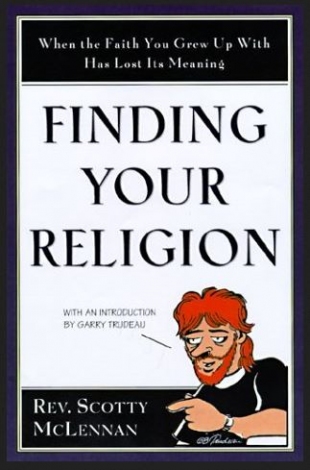