By Joseph Epes Brown
An examination of the spiritual themes that animate Native American cultures and communities.

The late Joseph Epes Brown was a professor of Religious Studies at the University of Montana. A renowned author in the fields of Native American traditions and world religions, he was one of the founders of Native American Studies and was largely responsible for bringing the study of Native American religious traditions into American higher education. He was the author of many books including The Spiritual Legacy of the American Indian. In this pathfinding work, Brown opens the door to the spirituality of many different Native traditions. Key themes include:

Brown does a fine job conveying how a simple thing like a different perspective on time could spell trouble between Native and non-Native Americans. A culture of clock watchers who viewed time as money could not relate to those whose lives are shaped by "moon cycles, animal migrations, and tidal changes." The author also examines the sacred geography of Native Americans who have deep respect for the earth. Assuming the role of caretakers, they regard prayers necessary to a balanced relationship between the land and the people. When they are not spoken, the land which once soaked up prayers becomes lonely.

Another cultural difference is the Native American respect for silence and Western culture's fear of silence. Contemporary society's fear of death is seen in the frenzied attempts to stay forever young whereas in Native society death is understood as holy and accepted as a part of the human adventure. A final area where Native Americans have proven themselves to be wise is their ability to see animals as spiritual teachers. The chapter on "Relationships and Reciprocity" has some wonderful coverage of the large role animals play in Native American communities.

Here are some precious gems from Brown's observations on Native American understandings of the world.

Letting Go of Artistic Creations
"When the Inuit leave their summer camps on the Arctic shores, many of the stone carvings they have made throughout the season are left behind. While tribal members certainly appreciate the carvings, they consider the process of making them more important than the pieces themselves."

Beauty Within
"The Navajo does not look for beauty; he generates it within himself and projects it onto the universe. The Navajo says shil büzbü 'with me there is beauty', shii' büzbü 'in me there is beauty', and shaa büzbü 'from me beauty radiates'. Beauty is not 'out there' in things to be perceived by the perceptive and appreciative viewer; it is a creation of thought. Beauty is not so much a perceptual experience as it is a conceptual one."
— Gary Witherspoon

The Missing Spiritual Connection
"Even elements of the environmental movement approach the earth as an object to be preserved, rather than as a spiritual reality to be respected. This misconception may prove to be fateful, for, as Tony Gonnela Frichner of the Onondoga Nation has pointed out, 'How can you "save the Earth" if you have no spiritual relationship with the Earth? There is an intellectual abstraction about the environment but no visceral participation with the Earth. Non-Indians can't change the current course of destruction without this connection.' " 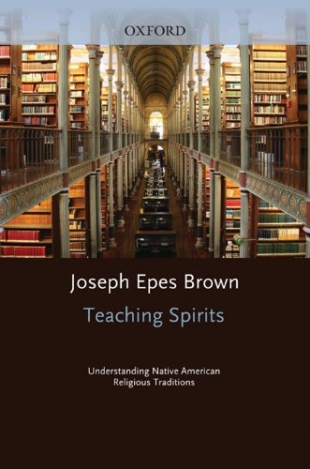