Rabbi Adin Steinsaltz is a teacher, philosopher, social critic and the prolific author of more than 60 books including Simple Words. His lifelong work in Jewish education has earned him the Israel Prize, that country's highest honor. Arthur Kurzweil, who previously assembled On the Road with Rabbi Steinsaltz , has compiled this impressive collection of wisdom from his favorite spiritual teacher's lectures, interviews, and writings. The book is divided into chapters on God, The Seeker, The Children of Israel, Torah, The Trials of Life, and Guidance.

One of the major tenets of Judaism is that God wants a living relationship with human beings. Yet this relationship is built on paradox and mystery. God is both hidden and revealed, and we are responsive to both activities. Or as Rabbi Steinsaltz puts it, "As for the presence of God — it is closer to one's being than the joy of living, closer than the beating of one's heart." We are deeply moved by this, even though the Holy One cannot be grasped or fully described. Faith is an inheritance but it can also be cultivated.

In a chapter on "The Seeker," Rabbi Steinsaltz writes: "Our goal is always to aim for greater heights, to be constantly struggling and striving to do better and to be closer to God." It helps to see one's life as "an annex of the Holy Temple." The chief work of human beings is to make corrections on the ways we think, act, and react in our daily lives. The quest is not for peace of mind or happiness but to become a spiritually free person. And that means finding our purpose and making full use of our special gift.

Here's another of the Rabbi Steinsaltz's pebbles of wisdom: "Being a Jew means that God intervenes in our pocketbooks, in our kitchens, in our bedrooms." He defines a Jew as person who is obsessed with God. He salutes the awesome power of the Torah and its capacity to spur us onward to the art of channeling God. He sees within the drama of the Jewish people the message that suffering has to be received and sometimes seen as a gift. Kurzweil ends this collection of wisdom gems with the following passage from Rabbi Steinsaltz:

"These are pregnant times throughout the world.

"Just as in geology we have breaking lines between huge blocks of earth, so today we are at the juncture between great blocks of time.

"This is the place of storm and volcano — and of becoming.

"In today's reality, a small act can have far-reaching consequences, beyond imagination, whereas things that will be done five or ten years from today will be so much less effective.

"This is precisely the meaning of pregnant times:

"Anything can be born.

"And this is exactly the time when one must not sleep." 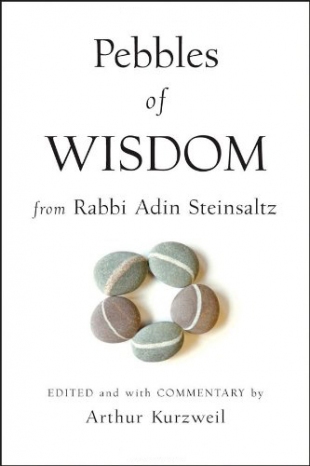