Future Tense Jews, Judaism, and Israel in the Twenty-First Century

By Jonathan Sacks
A masterful work on the mission of Jews and Judaism in this century.

Rabbi Jonathan Sacks has been Chief Rabbi of the United Hebrew Congregations of Great Britain and the Commonwealth since 1991 and has received honorary degrees from universities around the world. He is the award-winning author of more than 20 books including Celebrating Life and To Heal a Fractured World.

In this bold and courageous work, Sacks implores world Jewry to reject the long-held notion that Jews are a people alone in the world and surrounded by enemies. This understanding has led to a separateness which leads to paranoia, a reliance on military strength, and the commission of violence in the name of security. Instead, Sacks suggests reclaiming the divine project of joining with Christians, Muslims, Buddhists, Hindus, Sikhs and secular humanists in "tikkun olam" (repairing the world). The story the Jews have to share with the world is one of hope in the face of slavery, suffering, and persecution down through the centuries. They have endured and made a home for themselves in Israel. Sacks speaks the truth when he says: "The only people capable of threatening the future of the Jewish people are the Jewish people."

With great élan, the author states that Judaism is not an ethnicity, a set of folkways, a defiance of anti-Semitism and Jewish jokes. It is a faith forged in the wilderness and one that can be shared with others on equal terms. In answer to the question "Why does Judaism adhere to the tension between the universal and the particular?" Sacks points out that all humans are created in the image of God and each is different. Hence, Jews are not special but they have been the voice of the Other throughout history. They provide resistance to empires and the rule of the strong who want to impose uniformity upon all. With their lives they proclaim the dignity of difference.

Sacks describes anti-Semitism as a mutating virus and charts four historical mutations of this hatred, which unfortunately is alive and well in the twenty-first century. He concludes:

"Throughout history, Jews have borne the burden of difference. Whether in Christian Europe or the Muslim Middle East, they were the quintessential Other. That is Judaism's great contribution to humanity: to show that one can be other and still human, still a loyal and active citizen, still make contributions to every field of human endeavor, still be loved by God and held precious in his sight."

In the next three chapters, Sacks covers the failure of three great universalist dreams — Reform Judaism, Marxist socialiasm, and secular Zionism — and their connection with the current isolationism of Jews. Other chapters cover Israel as a gateway of hope and the New Zionism movement. In a section called "The Jewish Conversation," the author discusses ten Judaic principles of the encounter with otherness including God lives in language; when words end, violence begins; listening is a religious act; the dignity of dissent; and argument as a mode of conflict containment. Sacks moves on with a fascinating assessment of Jewish dialogue with the world and concludes with a meditation on Judaism as the religion of freedom and of the future tense. 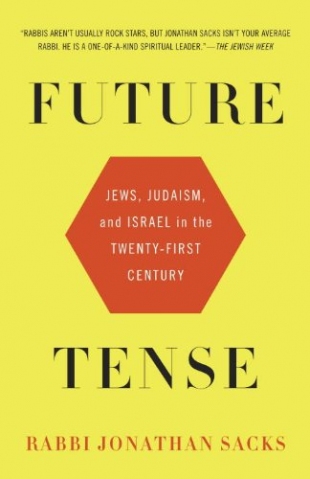