By Thich Nhat Hanh
A Zen master explanation of the path from stress and fear to being at home in the peace of the present moment.

In a Nutshell: Zen master Thich Nhat Hanh addresses the heavy psychological and physical toll of stress and fear on anxious individuals. We do not get anywhere by suppressing or trying to escape these feelings. Through mindful breathing and the "begin anew" practice we can build a refuge in the present moment where peace resides.

About the Author: Thich Nhat Hanh is a Vietnamese Buddhist monk, scholar, poet, and peace activist who was nominated for the 1967 Nobel Peace Prize. He lives in southwest France and travels regularly, leading retreats on the art of mindful living. He is profiled as a Living Spiritual Teacher at Spirituality & Pratice.

Sum and Substance: This Sounds True Audio Learning Course runs 6 1/4 hours on six CDs. Thich Nhat Hanh has been an emissary of peace to people whose minds and bodies have been ravaged by war, death, famine, and despair. Here he shares his wise teachings about toxic emotions. In the six sessions, he covers many important and universal topics including recognizing habit-energy, cultivating right thinking, healing broken families, holding anger like a baby, reducing violence in society, the gift of non-fear, the wisdom of non-discrimination, and nurturing peace with compassionate listening.

A Quote to Go: "Suffering persists because we nourish the feelings that cause it. Through mindful living, we learn to nourish our compassionate nature instead."

Other Spoken-Word Audios by This Author: The Ultimate Dimension 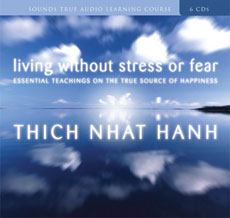