Freedom Journeys The Tale of Exodus and Wilderness across Millennia

By Arthur Waskow, Phyllis Ocean Berman
Reflections on the Exodus and wilderness stories in the Hebrew Bible and their relevance to our times.

Down through the generations, Jews and Christians have been challenged to re-interpret the Exodus story and the wilderness sojourn of the Jews with its many themes of freedom, slavery, leadership, power, facing death, rebellion, and war. Living Spiritual Teacher Rabbi Arthur Waskow, director of the Shalom Center and author of many books including Godwrestling - Round 2, and co-writer Rabbi Phyllis Berman tap into some of the fascinating themes in these stories, including:

Certainly one of the modern parallels to the Exodus drama is the plight of refugees around the world whose yearning for freedom and a better life animates their choices that often put themselves in jeopardy. They are today's boundary-crossers and wanderers, and we are challenged to see them not as strangers but as fellow travelers. Here is where the spiritual practice of hospitality hits the road.

Waskow and Berman believe that the community of Jews in the wilderness was solidified by sacred space, sacred time, and sacred personhood. Today these lifelines are threatened by new austerities, rampant xenophobia, the war on terrorism, the growing gap between the rich and the poor, and the tensions in the Middle East. In the chapter titled "Freedom Journey for the Planet," Waskow and Berman pose a series of complex questions to spur thought and discussion about the relevance of the Exodus and wilderness sagas to the present era. 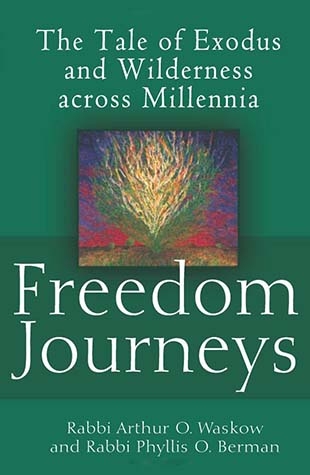