Engineer Ari and the Hanukkah Mishap

By Deborah Bodin Cohen
A fine children's teaching story about a Jew and a Muslim celebrating Hanukkah together in a very special place.

Train engineer Ari is in Jerusalem picking up things for the celebration of Hanukkah at his home. On the way, other Jews remind him of the history of a victory by the Maccabees over the army of a mighty Syrian king. When they restored the Holy Temple in Jerusalem a miracle happened: the seven branched menorah burned for eight days even though there was only enough oil for one day.

Engineer Ari boards his train to Jaffa, dreaming of the holiday celebrations with his friends. But he has to bring the train to a sudden stop to avoid hitting a camel seated on the tracks. The owner of the camel, Kalil (which means friend in Arabic), is a Bedouin. He helps Ari pick up his scattered Hanukkah things. By chance, the engineer picks up a coin from the time of the Maccabees. He learns they are on the very spot where the Maccabees once lived. Kalil invites Ari to his tent and accepts an offer by his new friend to celebrate Hanukkah together.

This is a timely teaching story by Deborah Bodin Cohen that brings a devout Jew together with a Bedouin on a Jewish holiday rich with history and meaning. The mutual hospitality of the two men is a miracle in its own right. This children's book is designed for children from the ages of 4 to 8. 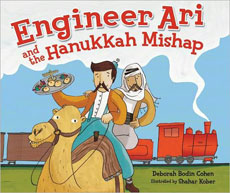