Ordinary Resurrections Children in the Years of Hope

By Jonathan Kozol
A work of great empathy and compassion about a poverty-stricken South Bronx neighborhood and the vulnerable children who live there.

In this illuminating work, Jonathan Kozol returns to the South Bronx neighborhood that was the focus of his hard-hitting Amazing Grace (1995). The area called Mott Haven is an epicenter for AIDS and pediatric asthma. Of the 11,000 children in the elementary schools here, only 22 are white. The rest are African-American, Hispanic, and very poor. Most have had no dental work and never experienced an eye examination. Kozol, in his sixties, worries about his two elderly parents; his sense of their fragility makes him equally sensitive to the vulnerability of the children of Mott Haven. This tribute to the little ones is about their "games and stories, and their silliness and sorrows, and the many intricate and sometimes elegant theologies they manage to create in order to invite into their lives the little mysteries that make them brave."

Kozol is impressed with teachers at an elementary public school and especially those who give all they've got: "Their gestures — even mundane classroom operations like the passing out of textbooks or the rapid, energetic 'tap-tap' of the chalk against the board — become infused with mystery, authority, and elegance, like secular epiphanies. Teaching children of this age, when it's done right, is more than craft; it's also partly ministry and partly poetry."

The author also salutes the ministry of "Mother Martha," an Episcopalian priest in charge of the afterschool program at St. Ann's. Kozol is moved when he sees her wearing a bracelet made out of jelly beans while standing before the cross to celebrate the Eucharist. But mostly he is taken aback by the courtesy and the kindness of the kids who befriend him. They incarnate "a sense of grace, a vision of eternity."

At one point, Kozol wonders about the purpose of incense. Ten-year-old Pineapple tells him: " 'It brings our prayers to heaven — with the smoke,' she said, and lifted both her hands to indicate the way the incense rises in the air. 'See the way the smoke goes up?' 'Yes,' I said. 'That's how our prayers go up," she said, then let her two hands flutter down."

Ordinary Resurrections by Jonathan Kozol is a prayer that will connect you to the children, the teachers, and the ministries of the South Bronx. 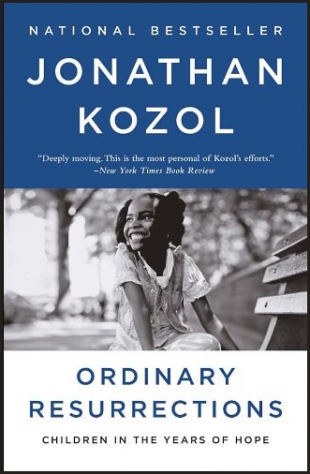