By Debbie Waldman, Rita Feutl
The trials of a little girl who thinks she needs a bigger room to hold all her stuff until her mother comes up with a better solution.

Daisy is upset because her bedroom is too small for the new toys she is expecting for her upcoming birthday. She is jealous of her best friend who has a gigantic bedroom with a closet that is bigger than Daisy's entire room. When she expresses her frustration, her mother brings her a box and says, "This box will make your room bigger." It is filled with all the stuff Daisy had planned to give to their synagogue's Mitzvah Day rummage sale but had kept instead. In the Jewish tradition, a "mitzvah" is a good deed such as giving to charity or serving others in some meaningful way. As Daisy unpacks more and more things from the box, she realizes that her bedroom is actually getting smaller.

Writers Debby Waldman and Rita Feutl have fashioned a nifty morality story inspired by an Eastern European folktale. The message is very clear: less is more and we owe it to ourselves, to the environment, and to future generations to live more lightly on the earth. Clutter is a sign of our inability to let go of possessions that we are no longer using. It's a good deed to give them away. And when we do, it is possible to change our way of thinking — just as Daisy does. 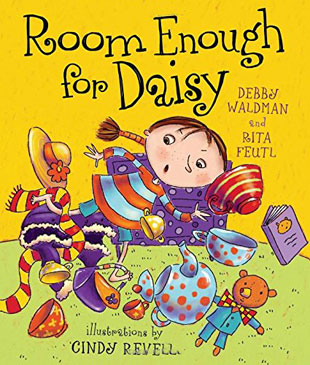