Oscar Romero Reflections on His Life and Writings

Here is an inspiring and edifying tribute to the life of Oscar Romero (1917-1980) on the twentieth anniversary of his assassination as he celebrated the Eucharist in the chapel of the Divine Providence Hospital in San Salvador. Dennis, Golden, and Wright note at the outset: "We don't learn to become saints the way concert pianists or ballerinas discipline themselves to virtuosity. Holiness is a commitment and a grace, something we seek, but mostly a gift — for Romero, a gift of God and the poor whom he loved."

Although Romero started out as a conservative Catholic priest and theologian, his faith deepened over the years and took a radical turn in response to the anguish of the Salvadoran people. The question that burned in his heart and eventually turned his life around was: "How do we speak of God in the midst of unjust suffering?"

The authors have culled some of Romero's most poignant words of prophetic power from his homilies, diaries, letters, and public talks. An example: "Some want to keep a Gospel so disembodied that it doesn't get involved at all in the world it must save. Christ is now in history. Christ is in the womb of the people. Christ is now bringing about a new heaven and a new earth." During his last three years as Archbishop of San Salvador, Romero spoke the truth to those in power, calling them to conversion, a change of their ways. And he was killed for it.

Dennis, Golden, and Wright salute Romero's spirituality, which was grounded in a reverence for the dignity of the human person, a belief in the salvation of individuals in history, and a celebration of "the transcendent dimension of liberation witnessed in the lives of the martyrs." This volume is part of Orbis's "Modern Spiritual Masters Series." 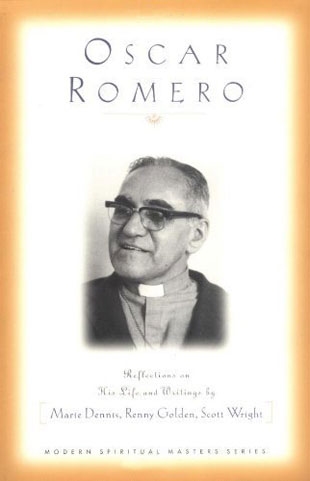