By Diana Eck
A spellbinding survey of India's sacred landscape and the pilgrims who frequent these places and spaces.

India: A Sacred Geography by Diana Eck aroused in us the same kind of keen interest and exotic feelings that Bruce Chatwin's book about Australia Songlines did for us in 1986. Both deal with sacred places and walking on a quest in search of meaning and fulfillment. We were very much taken by Eck's Darsan: Seeing the Divine Image in India where she explored the visual perception of the sacred. In Encountering God: A Spiritual Journey from Bozman to Banaras, she recounted how her exposure to the polytheistic consciousness of Hindus resulted in the expansion of her repertoire of images of God. Eck is professor of comparative religion and Indian studies at Harvard University and is master of Lowell House and director of the Pluralism Project. She is profiled at S&P as a Living Spiritual Teacher.

Capitalizing on three decades of study on the myths, rituals, cosmology, and religious activities of Hindus, Eck has created a lucid and enlightening map of India and its peoples' adherence to the spiritual rewards of pilgrimage. The sacred is found everywhere in this land of mountains, rivers, seacoasts, forests, villages, cities, shrines, temples, and burial grounds. These places are signs of the gods and the mythological tales connected with them:

"The word tirtha is primarily associated with those crossing places that bring the traditions of the gods and goddesses, heroes, heroines, and sages to living embodiment in India's geography."

Eck is convinced that there is an idea of India, and it is not a nation-state but a 2000 year fusion of geography and mythology resulting in a landscape of tirthas. Even as the Australians did their walkabouts in the desert and sang their way through various sacred locales, Indians have practiced circumambulation or walking around mountains and other places as an act of honor. And among pilgrims there is nothing but deep respect for "Mother Ganga," the river that is "embracing, nourishing, and forgiving, without a trace of anger."

With ease, Eck introduces us to Shiva, the mountain god; Shakti, goddess of the earth; Vishnu who pervades the earth, atmosphere, and the heavens beyond; the playful Krishna; and Rama known in the exile and love stories. One wonders how these deities will fare in the new India where mobile telephone use is growing faster than anywhere else in the world (15 million new users started each month in 2010). But instead of vanishing, pilgrimage is growing and the Internet is making things easier for devoted Hindus. Many are worried about the impact of climate change on the Indian landscape and the dire effects of ecological damage to these sacred places. But today's pilgrims, like their ancestors before them, keep on walking and walking and walking. 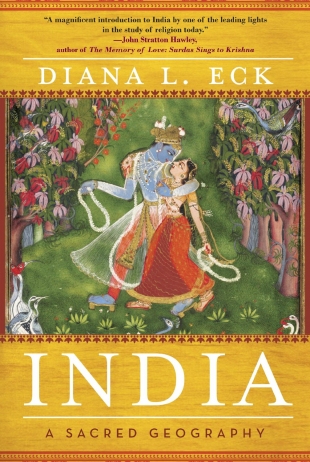