By Shahrukh Husain
Short fables for children featuring the crazy wisdom of Mulla Nasruddin, a Sufi fool whose upside-down views of the world elicits our laughter and thoughts.

Coyote, St. Francis and his order of Jesters of the Lord, Zen masters, Taoist sages, Hasidic storytellers, clowns and performance artists — such prophets (and all the spiritual traditions have them) encourage us not to take ourselves too seriously. They say that what we know is not worth knowing, and what's worth knowing cannot be known through our ways. To our sensible selves, their actions seem silly, shameless, even shocking. But they have an important role in the spiritual life. They carry the banner for the spiritual practice of play.

Mulla Nasruddin is a fool in Sufi teachings who is right at home making mistakes, doing the unexpected, and turning things upside down. In her introduction to this delightful collection of 22 short fables featuring the crazy wisdom of this 13th century Turkish mystic, Shahrukh Husain points out that Mulla Nasruddin acts as the conscience of his community who pays little attention to social propriety or conventional ideas and ideals.

Whether he's talking to his donkey, giving advice to others, fishing, or playing his role as a judge, Mulla Nasruddin tickles our funny bones and assures us that we should lighten up.

A good deal of our enchantment with The Wise Fool: Fables from the Islamic World comes from the extraordinary illustrations by Micha Archer. Her two-page spreads are colorful extravaganzas that engage the eyes while accentuating the magical dimensions of the fables about Nasruddin and his wacky perspectives on the world. 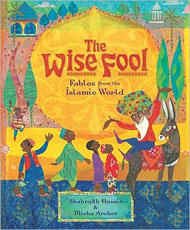