A Season in the Desert Making Time Holy

By W. Paul Jones
Sees the Christian faith as a pilgrimage based on the sacralization of time.

Perhaps the best interpreters of Christianity in the twenty-first century will be "bridge people" able to span the differences between believers. W. Paul Jones, for 40 years a Methodist minister, is now a Trappist monk and Roman Catholic priest. He has been an academic, an activist, a poet, and a pilgrim. All of these experiences inform this richly nuanced theological work where he celebrates Christianity's reverence for mystery and its power to sacralize time.

Near the start, Jones quotes Thomas Merton who said, "The beginning of spirituality is to do nothing and feel no guilt." He sees Christianity as "an alternative to the sweeping conquest of secular capitalism" where the emphasis is upon doing, succeeding, and making others feel bad. Jones is convinced that "monastic life is a powerful counter-cultural community, as life in a new time intersects a new space and day by day life is marinated in Mystery." The pilgrimage of the believer is one of craving for the Divine, seeing faith as seed and promise, relishing solitude and sacredness of place, and finding in the Eucharist an ever-present source of grace.

One of the marvels of monastic life for the author is the way the monk "obeys Christ's teaching to live only one day at a time, without anticipating one's tomorrow, which may never occur, or being depressed over the past, which is forgiven." Jones discusses the many meanings inherent in the church year and in the offices of the day. A Season in the Desert: Making Time Holy by W. Paul Jones is a theological gem.

Try a Spiritual Practice on Wonder 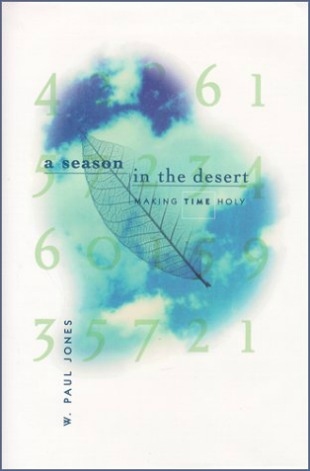