Be playful and think of this academic work as a tag team wrestling match. In the corner on the right are Hillary Keeney, a Professor of Psychology, a seasoned scholar, a practitioner of personal and social change, a student of Zen, and a dancer. With her is her husband Bradford Keeney, a renowned creative therapist, cybernetician, anthropologist of cultural healing traditions, and improvisational performer. These two baby faces (good guys) are set to put on display their wide-ranging repertoire of kicks, slams, and butts on their opponents from the left corner — two stubborn and inflexible slaves of traditional therapy with its rules and regulations. The crowd is already booing these two heels (villains in the ring).

Will the Keeneys' new style of circular therapeutics carry the day or will the traditional therapists manage to tap into the energy and enthusiasm they had years ago? Brad is out in the middle of the ring demonstrating moves he learned from Gregory Batson that are eliciting screams of distress from one of the heels who is unsuccessfully trying a stranglehold on him. It is amazing to watch this shaking baby face circle around the opponent with a host of improvisational moves.

Brad tags Hillary and she comes out wearing an enlarged heart on her chest signifying the Keeneys' identification with all the wisdom traditions around the world. She is swift and graceful in her moves, and we marvel at the ease with which she is making her opponent see that therapy is a Zen koan. Her dominance of the robotic therapist used to the old ways is complete, and we applaud her efforts to bring a healing heart to therapy through play, improvisation, dance, poetry, singing, and creativity.

How can we explain the swift and conclusive triumph of the Keeney baby faces over the traditional therapists? They share with the crowd some of the pre-fight training sessions they held including mastery of a Batesonian toolkit and examples of cases involving circular therapeutics. The Keeneys have the right stuff to bring about a long-needed and much-desired alternative to traditional therapies. Best of all, we never know where they are going to go next or what creative possibilities they are going to unleash upon those of us seeking spiritual transformation. Not-knowing has never been so much fun! 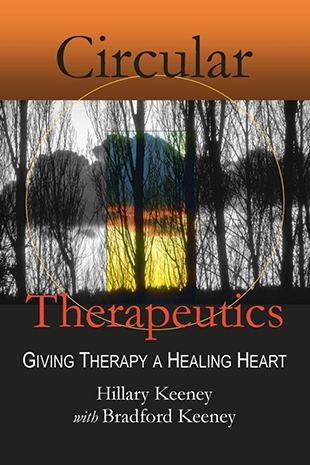