By Betty Rosenberg Perlov, Cosei Kawa
An enchanting tale about a Jewish girl who finds her place onstage with her parents who are Yiddish theatre actors.

Betty Rosenberg Perlov, the author of this children's picture book, grew up in the Yiddish Theater where her mother was an actress and her father, a producer. Always artistic, she was a "child star" on her father's weekly Yiddish radio soap opera.

In this book, Rifka grows up in New York City where her mother and father are actors in one of the Yiddish theaters on New York's Second Avenue. She is used to seeing them put on their makeup and assume the different identities of the characters they are playing on stage. In a surprising turn of events, Rifka tastes the delights of being onstage and is hooked on the idea of being an actress when she grows up.

Perlov's tale gives us a tour of what it's like to be in the theater. The exquisite illustrations by Cosei Kawa add to the effectiveness of this story. The age level for Rifka Takes a Bow is 5 through 9 years of age. 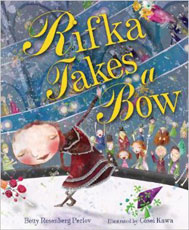