By Stephen Levine
A multi-leveled tribute to Kuan Yin, the Bodhisattva of Compassion.

Stephen Levine is an American poet, author, and teacher best known for his work on death and dying. He is one of a generation of teachers who, along with Jack Kornfield, Joseph Goldstein, Ram Dass, and Sharon Salzberg, has made the teachings of Theravada Buddhism more widely available to students in the West. Visit him at levinetalks.com.

Kuan Yin is the beloved goddess of compassion in Buddhism. This female bodhisattva, according to ancient scriptures, was about to enter Nirvana when she heard the cries of those suffering in the world and vowed to remain until all sentient beings had been liberated from suffering.

Although she is seen mainly as a healer, Kuan Yin is also an example of the powerful energy of women who have preserved their ideals over the centuries despite the constraints of the male-dominated societies in which they live.

Levine presents the tale of Miao Shan, born to a king who wanted her to wed a rich but uncaring man. She rebelled against his wishes and became Kuan Yin who, among other things, has been heralded for watching over the dying and those who work with them.

"Kuan Yin's presence is the abode of compassion in which we live; the deep satisfaction of generosity and gratitude, loving-kindness and sympathetic joy, forgiveness, patience, mercy, and a lifetime commitment to self-discovery and the well-being of others." 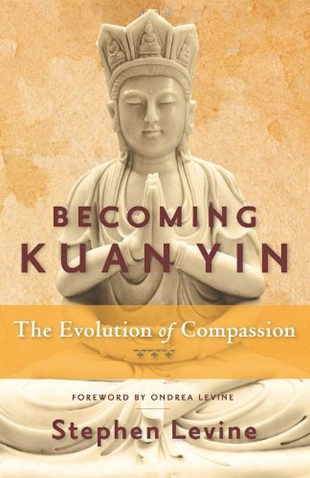