Poppy has a bad habit of lying all the time. At home she says she didn't break a dish. At school, she breaks a window during morning recess and blames it on another student. She spills water on a painting and says someone else did it. She gets very unpopular by saying such untruthful things. Eventually Poppy realizes that she needs to change things so she begins by apologizing to the friends falsely accused of doing. Then in earnest, Poppy fixes the window she broke and rectifies other matters as well.

Sue Graves has written this children's picture book for boys and girls from 4 through 8 years of age. It is part of the "Our Emotions and Behavior" series which focuses on social skills that children can learn through practice and discussion. It is designed for adults to share with either an individual child or a group of children. Suggestions for presenting and discussing the story are given in a two-page supplement at the end of the book. 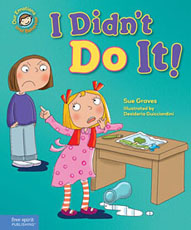