By John R. Mabry
A map of the generations within congregations who have different hopes, needs, and spiritual emphases.

John Mabry is a United Church of Christ minister, spiritual director. professor, and author. He teaches spiritual guidance, world religions, and comparative theology at John F. Kennedy University, Sophia University, Santa Clara University, and The Chaplaincy Institute. His previous books include Growing Into God: A Beginner's Guide to Christian Mysticism and Noticing The Divine: An Introduction to Interfaith Spiritual Guidance.

One of the responsibilities of Christian ministers is equipping the saints. It is not an easy task given all the time, energy, and creativity which must be put into research, writing, and organizing programs and classes. Many ministers decide early in their careers to put their emphasis on preaching instead. We think that widespread choice is one of the reasons why mainline Protestant and Catholic congregations are losing members as people in all generational cohorts are turning elsewhere for resources for their spiritual journeys.

John Mabry addresses this challenge in this very insightful and practical work which maps the various generations in churches. They are:

As we look at the diversity of these five living adult generations, we see that the old model of a one-size-fits-all adult ministry is no longer viable. With great elan, Mabry delineates what turns on members of each age cohort, what questions and quests animate them, what devotional styles appeal to them, and the ways in which they see themselves. He also comments on their blind spots.

The author's 20 years in congregational ministry and 14 years practicing and teaching spiritual direction serve him well in the organization and selection of material here. Mabry admits that the Millenials get the longest coverage in the book given all that has been written about them as the most recent age cohort.

Faithful Generations can be seen as a sequel to Faith Styles: Ways People Believe. When these two are set alongside Mabry's explorations of mysticism and interfaith spiritual guidance, it is clear that he is doing pioneer work in mapping the ever changing territories of religion and spirituality. Picture him as a scout describing the wilderness that lies ahead. We eagerly wait to see where Mabry will take us next. 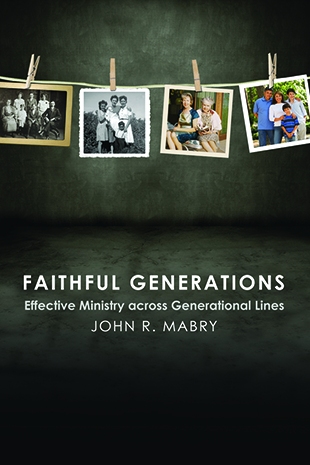