By Ellen Goldberg, Mark Singleton
An enlightening survey of leading yoga gurus from around the world.

Mark Singleton, who teaches at St. John's College in Santa Fe, and Ellen Goldberg, associate Professor, Department of Religious Studies, Queen's University, have put together an enlightening survey of the leading yoga gurus from around the world within the Hindu diaspora. They cover both the positive and the negative sides of these spiritual leaders and their devotees.

Singleton and Goldberg begin with Swami Vivekanada (1863-1902), the first teacher of yoga in the West and end with Swami Ramdev (b, 1975) who has been called a modern yoga "revolutionary" for his ecological and political activism. He believes that this spiritual practice is the answer to the individual and collective needs of India.

Another pioneer is Sri Aurobindo (1872-1950) who brought to the yoga movement the evolution of consciousness, an integral approach to spiritual development, and a socially transformative this-worldly wisdom.

Singleton and Goldberg do a fine job covering the transnational yoga of T. Krishnamacharya (1888-1989) whose students included B.K.S. Iyengar (b, 1918) who popularized a posture-based global culture of yoga. The authors sum up his legacy: "He emphasizes above all that dedication, thoroughness, and acutely focused consciousness from skin to bone, from external to internal, are what he represents as an exemplar or guru."

Other notable gurus who are given substantive treatment are Swami Krpalvananda (1913-1981), the teacher behind Kripalu Yoga; Muktananda (1908-1982), a Tantric hero and entrepreneurial godman; Sathya Sai Bab (1926-2011), a reputed miracle-worker and healer; and Sri Sri Ravi Shankar (b, 1956) who has used modern technology to convey his teachings. 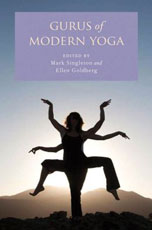