By Sandra Levins
The journey of a young thief who sees the errors of his ways and decides to change.

When David sees something he wants, the need for immediate gratification takes over. This is not only a sign of his impatience but proof positive that he feels entitled to getting whatever he wants. This has resulted in David "borrowing things without asking" - like his best friend's Superman doll, his aunt's pin, his neighbor's ball. He keeps his stash in a special box in his room.

But David's unethical activities are put on hold when someone steals his Bumblebee bike. How could anybody do that? Now that he has experienced what it feels like to have something taken from him, he decides to make amends by returning everything he has stolen.

Bumblebee Bike is written by Sandra Levins with illustrations by Claire Keay. It has been designed to reach children from ages 4 through 8. As is the case with all of these children's books published by the American Psychological Association, there is a Note to Parents and Caregivers at the back. It is contributed by Mary Lamia, a clinical psychologist and psychoanalyst from Marin County, California. She writes about helping children develop ethical behavior and the challenges of being a role model. 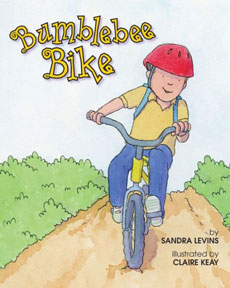