College and University Chaplaincy in the 21st Century

By Lucy A. Forster-Smith
Essays from chaplains in a time of transition at campuses.

In the introduction to this collection of 18 essays by chaplains at a variety of colleges, editor Lucy A. Forster-Smith writes:

"Our work as chaplains places us at the intersections of tradition and innovation, secularity and the sacred, and in some ways, hope and despair. The contributors to this book bring to it years of programmatic, pastoral, theological, and administrative excellence. They are respected colleagues, brilliant thinkers and practitioners, radical and adventurous leaders."

Here are some the major concerns and themes addressed in this edifying work. Chaplains working in multicultural and multifaith contexts discuss how they must be willing to shift gears and be more flexible and hospitable than in the past. Another group of ministers share their ideals and practices as they serve college students who come to them for counsel and spiritual companionship. Three authors tell their stories of working new turf which leads to fresh possibilities for ministry and theology. The final section of the book probes the chaplain's changing role at today's secular universities.

Most of the clergy writing these essays are in a transitional stage of their ministry as their work, the culture , and the university are changing. It is interesting to see how they react to being in this "in between" state of being. Others share what it feels like to be pushed into new ways of doing things. The Catholic, Protestant, Jewish, and Muslim authors recognize the need for collaboration as they make plans for the future.

Years ago Frederic worked as a chaplain on a multifaith team of clergy at Cornell. We were always looking for fresh ways of bringing the faith and a passion for justice alive in students. But first we had to get their attention. We created a 8' x 4' light box filled with 4" squares, each housing a blinking light. The engineering students were fascinated by it and sat around the coffee shop analyzing the patterns created by the lights. Eventually, we all got to talking about other ideas and ideals.

In a recent article in The Week, we read that for the first time since 1947, America's most common age is no longer one in the Baby Boom generation. New Census Bureau data shows that 22 year olds are now the most numerous age group in America. These chaplains are sewing spiritual seeds among this generation. We shall see what blooms. 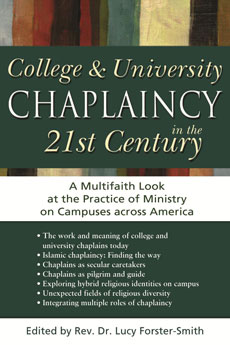